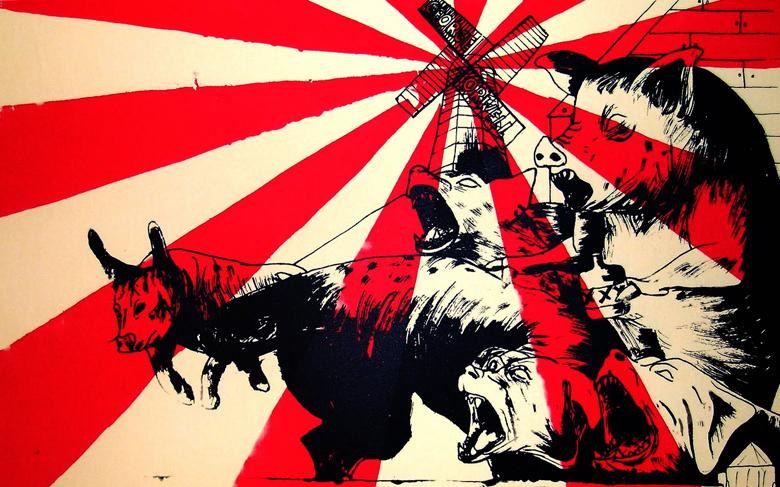 When thinking of pigs, a few things come to mind: pink, messy, fat, delicious, even cute — but not intelligent. Certainly not to the point where they could overthrow humans and run their own little empire inside a farm, right? Try telling that to George Orwell, author of the celebrated and banned book Animal Farm.

Tired of their labor and mistreatment, the animals of Manor Farm do what any animal would have do, of course: rebel, overthrow their master, start their own form of government, learn to read, write, plant crops, and build a windmill. But in the hands of the wrong pig, will the system they once believed to be so spectacular turn out worse than they’d ever imagined? A satirical critique Stalinist Russia, Animal Farm explores a leadership in the name of society as it turns to corruption and then to tyranny once again.

I loved this book! Orwell’s simple writing style shows the consequences of power when it falls into the wrong hands. It is written in a straightforward tone that masks the true, complex meaning of the story. I particularly enjoyed this book because it made me think about things I had never really considered before, such as the concept of communism and hierarchy and the way these things affect society. Although the book makes you use your brain, it does not in any way have a boatload of difficult language to make the story confusing (which I felt was great on Orwell’s part as most classics do tend to contain hard to understand language that often makes the book boring and unappealing). In addition, the plot is captivating and includes well-developed, engaging characters – the traits of a fantastic read.

Although I adored the book, apparently not everyone does. It is banned from all schools in the United Arab Emirates because it depicts images (such as pigs drinking alcohol) which are considered indecent in the Islamic culture. The book has been banned in certain schools in New York, Georgia, and Russia because of its political theories and views of rebellion. If you are looking to get into this rebellious spirit of Banned Book Week, Animal Farm may be the perfect choice. The Beasts of England would be very pleased with you.