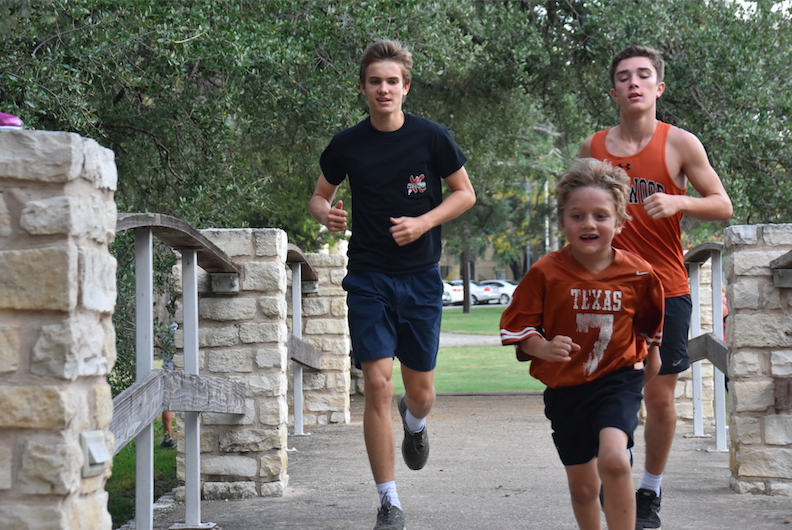 Zach Shrull ‘19 and Sam Helwig ‘19 cross the finish line with their buddy finishing in front.

Warriors in cross country hosted the first annual Run with the Warriors on Saturday, Oct. 15, where elementary students were able to learn about the cross country program as well as participate in a race. With several auctions and raffles, the event doubled as a fundraiser for the program.

Every feeder elementary school was given flyers to distribute to ensure a successful turnout at this event. Students and coaches also went to social media and made door to door pitches to promote Run with the Warriors.

“I personally walked around and knocked on my neighbors doors and talked about it, it’s a really fun event and I just would like everyone to come out because the more people the merrier,” Adam Kelley ‘19 said.

This clinic was a chance for cross country athletes to gain more awareness about their sport, as well as get the community involved. Young runners aspiring to join once they reached high school were able to use this opportunity to really understand the program.

“It’ll help the young ones in the community by getting a chance to capture the enthusiasm and heart it takes to run long distances,” head boys’ cross country coach Stephen Cobbs said.

Warriors first buddied up with a younger runner to lead them through the exercises. They started off with agilities, which is what the athletes do to begin every practice. After a quick round of stretching to ensure everyone was warm, everyone began the mile race. Students were positioned throughout the race to encourage and cheer the runners on.

The first place finisher was Abigail, a sixth grader from Grisham Middle School, while second place went to a fourth grade student at Purple Sage, who both expressed interest in joining cross country in the future. Every participant was given a medal and a certificate to count towards Marathon Kids mileage.

“The little kids really look up to [Warriors], and enjoy running with them, they’re like little heroes to them,” head girls’ cross country coach Kim Payten said.

A raffle for gift certificates to Ready to Run was drawn for both the young athletes and Warriors. There was also an auction for two different pairs of running shoes, as well as tickets to the Army versus Notre Dame football game at the Alamodome.

With orange and white medals hanging around their necks and smiles plastered on their faces, the kids and Warriors alike had a great time meeting one another and running together. However, coaches only hope to expand and improve this annual event with a potential partnership with Town and Country.

“We hope to make it bigger and better next year,” Coach Cobbs said. “But it was a success because of [everyone who came out].”