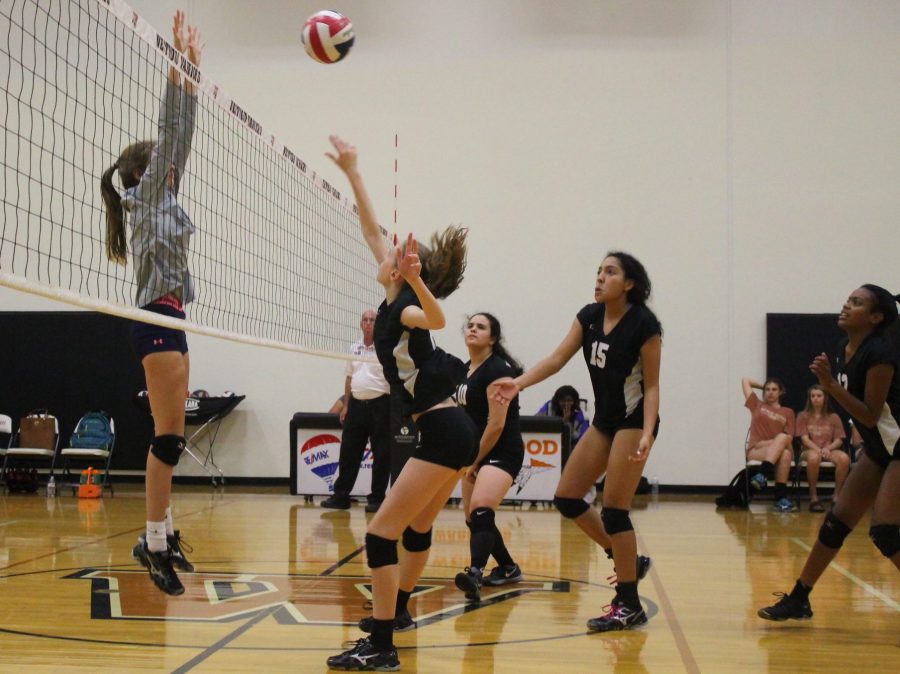 The team watches on as Abby Brueck '20 returns the ball to the opposing side.

The freshman volleyball team finished their season with a spectacular 2-0 win against the Hendrickson Hawks on Tuesday, Oct. 26. Having come up with specific plans on improving execution and communication from the last game, the team was able to work together and end the season on a high note.

With a 16-10 overall record and a 6-6 record in districts, the team was determined to lay everything out on the line for their last game. The first set started strong with serves from Madison Metzger ‘20, which gave the Lady Warriors a three point lead against their opponents. Middle blocker Kate Jernigan ‘20 and outside hitters Abby Brueck ‘20 and Renata Salazar ‘20 demonstrated impressive teamwork with combinations of bumps and spikes to finish the point off. The Lady Warriors moved up 7-1, forcing the Hawks to call a timeout. Strategic plays by Taylor Cason ‘20 that featured kills and sets added to their lead. The team was also able to execute smart dips as a benefit. With an ace from Sarah Sherwood ‘20 and finishes by Cason, the Lady Warriors ended the set 25-17.

With their win from the first set giving them momentum for the second, the team broke to start off and immediately pushed ahead. Double quick hits by middle blocker Lucero Cabral ‘20 and Brueck finished points to allow a 9-2 lead for the Lady Warriors. At this point, the Hawks called another timeout to try and reconvene, yet they were no competition for the Lady Warriors’ strong offense. Metzger and Mary Tiangco ‘20 communicated well with their teammates to set up for kills to add to their lead. Brueck’s consistent serves led the team to a score of 17-7. The Hawks had several passing issues, and called a last timeout when the score was 23-11. With a finish from Cason, the Lady Warriors won their last set 25-12.

“Their bumps, sets, and spikes were working really, really well, and it all goes back to execution; they really execute very well,” Coach Framjee said. “We focus every week on executing, and execution has just been great.”

The team has made tremendous strides from the beginning of the season, which led to their well deserved accomplishments and being able to win a majority of their games.

“We definitely started communicating and getting to know each other better, so that worked out really well,” Cabral said. “We’ve learned each other’s strengths and weaknesses, allowing us to tell one person to adjust one thing and another person to adjust to another.”

Though the freshmen have concluded the season, the varsity volleyball team will continue on into playoffs with a warm-up match against Rouse High School at Rouse on Friday, Oct. 28.