The Essentials of the Electoral College 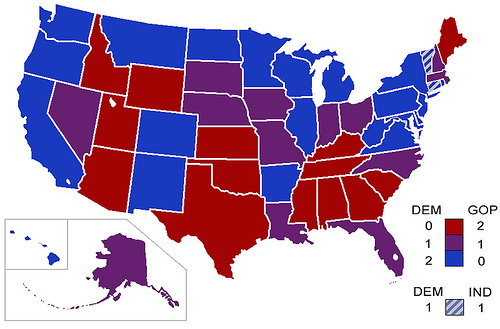 As the monumental cumulation of campaigning that comes to a head on Election Day looms closer and closer, polls have been updated daily to show changes in popular opinion. Many people follow the polls religiously in an effort to deduce the outcome of the election. However, often times, people are quick to forget that the popular vote is not the only aspect of the presidential election; the electoral college is the other deciding factor in electing the new leader of the country. Despite being familiar with the words “electoral votes” as it is used in political jargon, few people understand the actual process the delegates follow. Here are the answers to five questions that will finally help you to better understand the importance of the electoral college to the American political process:

What is the Electoral College?

Let’s start with the basics. The electoral college is not a physical place, but rather the name of a process that merges the popular votes of American citizens with the vote of chosen congressional electors. There are 538 electors in total, and 270 votes are required to declare a candidate the winner. Each state is allotted a certain number of electors– two for the senators and one for each member in the House of Representatives.

How do the electors choose who to cast their votes for?

Electors do not necessarily have to vote in accordance to the decision of the people, as there is no federal law that states this. However, many state laws declare that Electors must cast their votes according to the popular vote of that state.Generally, electors will vote in line with the party that they represent, as “faithless electors”, or electors who vote against the popular vote are rare cases.

What happens if there is a tie in electoral votes?

Can the electoral college overthrow the popular vote?

Yes- rare cases of this do occur, the most famous being the Al Gore against George Bush election of 2000. The tumultuous election ended in a supreme court case which ruled that although Gore had won the popular vote, Bush had triumphed over Gore in the electoral college and would therefore be the one to serve as president.

Why are some people against the idea of an electoral college?

Critics of this system claims that it creates an imbalance between the power of the states, as candidates often dedicate their time solely to swing states and states with a larger delegate count. The electoral college can also often sway the margin of the vote, because one candidate will have seemed to have won by a large amount due to the fact that electors will most likely automatically vote for the winning party in their state, making a candidate seem as though he or she won by a large amount when in reality, the popular vote was very close.

Although the electoral college is an important process that will ultimately determine the winning candidate, the popular vote is still seen as an integral part of the American political system as it has a profound effect on the allegiance of the electors. Don’t forget to let your voice be heard by voting this Tuesday, November 8th.