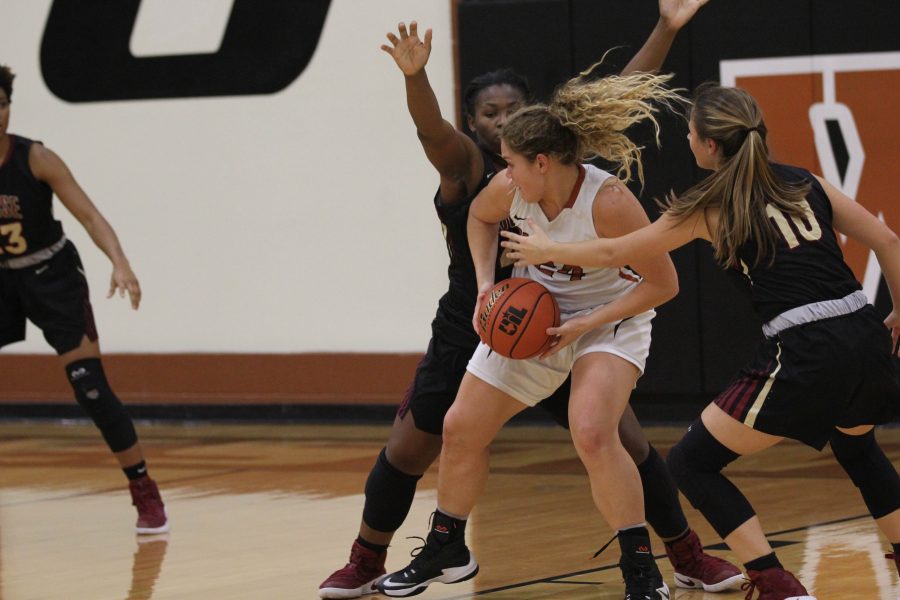 In a tense game against the Rouse Raiders on Friday, Nov. 18, the varsity girls’ basketball team brought home the win, ending overtime with a score of 53-49. Rouse proved to be a tough opponent, but powerful offensive plays during the last two minutes of overtime allowed the Lady Warriors to hold a slim lead and ultimately claim the victory.

“Rouse is a really good team, really well coached, very tough, and it’s just a fight,” varsity girls’ coach Doug Davalos said. “We didn’t play very well offensively, but when we needed to get stops at the end we played well. We’ve got to be able to put the ball in the hole.”

The first quarter began with the Raiders winning the tip-off and scoring a two-pointer. Shortly afterwards, with a foul by Rouse, McKenna Lindley ‘18 brought the score up 2-2, and the first timeout of the game was called by the Warriors. Points were racked up with strong offense by Mari Robinson ‘17 and a three-pointer by Danielle Davalos ‘19, ending the first quarter 11-7.

Coming back from halftime, the Warriors were able to pull ahead, with Meaghan Hendricks ‘18 scoring a three-pointer and increasing the lead the Warriors had.  The team displayed their defensive skills, with a steal from Hendricks and great communication allowing Davalos to sink another three-pointer. The third quarter ended with a buzzer-beater by Lindley, the Lady Warriors keeping their lead of 40-29.

The fourth quarter was marked with incessant fouls, allowing the Raiders to quickly catch up to the Warriors. With only two minutes and 55 seconds left on the clock, the two teams were tied 40-40.  Fouls by the Warriors resulted in the Raiders briefly taking the lead, though points scored by Madison Couch ‘17 and Davalos ended the fourth quarter with a tie of 44-44, resulting in overtime.

“It definitely gets in your head a little bit, because you want to win,” Davalos said. “We need to be smarter on defense and not foul as much, and find more ways to score.”

Rouse put two points on the board within the first 20 seconds of overtime, but with a foul awarded to Couch, the Lady Warriors caught up with a score of 46-46. A three-pointer by Robinson put the home crowd on their feet and placed the Warriors in the lead. Fouls by Rouse allowed Davalos and Couch to add more points to their lead, and with defensive plays  preventing the Raiders from gaining points, the game ended with a score of 53-49.

“Overtime wins are always awesome, but you shouldn’t be there in the first place, you need to just take care of business in the regular game before overtime, but winning in overtime feels amazing, for sure,” Couch said. “We need to improve on our offense for sure, we had a really good defensive game, but offensively we just need to execute better.”

The varsity girls’ basketball team will battle it out against the Killeen Kangaroos at their next home game on Tuesday, Nov. 22.