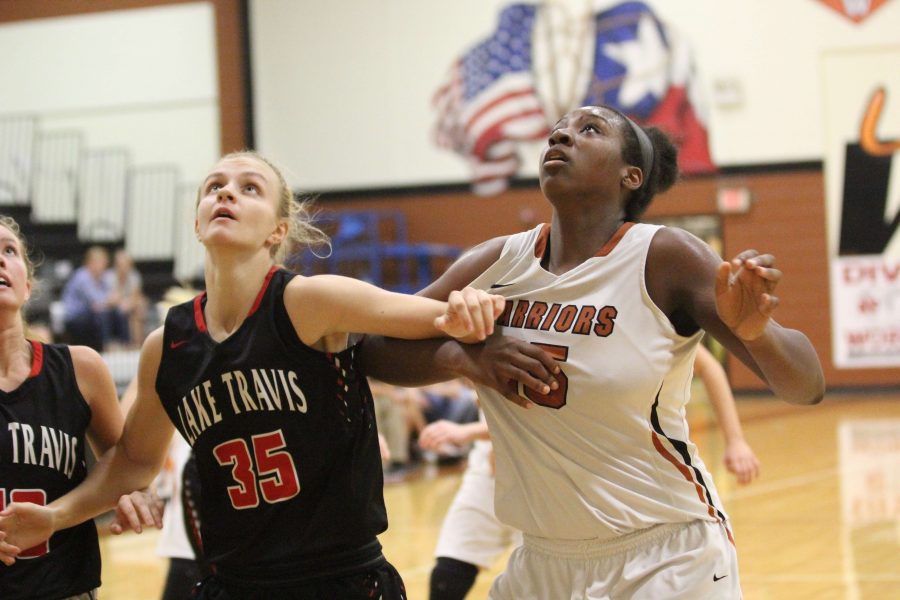 Kandyce Shepard '17 watches as her shot goes up.

With a score of 60-43, the varsity girls’ basketball team brought home the win in their non district game against Lake Travis High School on Tuesday, Nov. 15. Although incessant fouls were called throughout the match, the Lady Warriors came out on top with their dynamic attacks and assertive defense.

Striving to continue their lead in the second quarter, the Lady Warriors displayed strong defense with a steal from Robinson. Davalos extended their dominance with a layup followed by a three-pointer. The team communicated well on the court, allowing them to execute strategic plays. Once the score reached 21-10, the Lady Cavaliers were forced to call a timeout. Following this, Meaghan Hendricks ‘18 sank a three-pointer and left for halftime 29-20.

“We always think we can get better everywhere, we didn’t guard the 3 point line very well, we fouled too much in the first half,” varsity girls’ coach Doug Davalos said. “Those things have to be corrected for us to be the kind of defensive team we need to be in our district.”

After reconvening in the locker room, the team was determined to finish the game with a strong lead. Shepard and Madison Couch ‘17 were able to get rebounds and gain opportunities to add to their margin. At a score of 46-35, Lake Travis called another timeout. However the team’s offense could not be deterred; they scored a total of 21 points in this quarter, the most by either team of the game.

The last quarter began with the score at 50-38. Davalos’ speed allowed her to run through the Lady Cavalier defense and finish with a layup. Robinson roused the crowd onto their feet when she ran the entire court, ending with a basket. The opponents called two more timeouts within the quarter, and the game concluded 60-43 in favor of the home team.

While the Lady Warriors were able to keep the lead the entire game, their defense felt that they were lacking their usual communication.

“We let them score 43 points on us, which we try to hold teams to under 40, so defensively it wasn’t too great, we need to work better as a team because we weren’t really on the same track most of the game,” Christina Maunder ‘17 said. “We need to stay in our own zone and do our jobs and focus on what we’re good at. Every player has their own part and we all have to do that.”

The team is still in pre-season, and they have high expectations going into the future and have made specific plans on how to improve.

“Individually, there were a lot of plays that I could’ve finished, I know that for a fact and I can just come back and work harder, and as a team we can always get better at defense, we’re never perfect so we just come out and perfect the way we are and do better, and we’ll be happy as a team,” Madison Couch ‘17 said. “I have high expectations, I think we can do really well we just need to put our mind to it, we just need to play hard and practice every day like we can, and we’re gonna go far.”

The varsity team will face the Rouse Raiders at their next home game at 7 p.m. on Friday, Nov. 18.