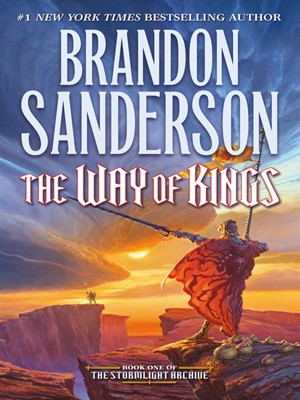 Brandon Sanderson has yet again produced another intricate epic fantasy novel, this time in the form of The Way of Kings, the first book of a projected 10-book series, The Stormlight Archive. Set in the supercontinent Roshar, The Way of Kings follows the story of Kaladin, Shallan, Dalinar, and Szeth, whose paths all cross in complicated ways not revealed until later in the series. In a world where social class is determined by the color of your eyes, the lighteyed Alethi are fighting in a war against the Parshendi, with the darkeyes serving as their soldiers and slaves.

During the current day war against the Parshendi, the armies are gathered around Shardblade-wielding warriors. Sanderson spends much of the time worldbuilding and laying out the foundation for the book, and thus the over thousand-page long novel seems more like the first chapter of a much larger story.

The Way of Kings is like no other novel– it’s simply so easy to get sucked into the world of Roshar. It’s almost as if the reader is able to experience the story alongside the characters. The dense, doorstopper-sized book is so filled with information that I often had to put down the book for a moment and absorb what new developments were introduced.

Per usual, Sanderson creates several complex and well-thought-out magic systems, all of which require the use of Stormlight. Information on each system is revealed throughout the book, and with the help of diagrams, Sanderson explains the magic in a way that makes it easy for the reader to understand.

The world is built from the ground up, with everything revolving around the highstorms. In simplistic terms, Roshar is like the ocean habitat, only on dry land. Plants have adapted to the seemingly death-sentence storms by retracting into the rocks around them, and animals are covered in a thick crustacean shell. Sketches scattered at every chapter mark help bring the book to life. Each chapter begins with a short quote, seemingly useless and utterly confusing, though at the three-quarters mark of the book, everything begins to click.

In the midst of the array of names, ecology, religion, and places, what may be most impressive is the character growth shown. It’s clear that Sanderson values fully developing each character, and with their traits and internal struggles, they’re relatable and easy to grow attached to. The three main protagonists’ different backgrounds allow a deeper insight to what society is like in Roshar. Even the supporting characters are able to bring something important to the table. While the characters are interesting, the people groups of Roshar are utterly fascinating. Ranging from the the Purelakers who can communicate with the fish in their home waters, to the Parshendi, who have strong enough legs to jump across entire chasms, it’s the little details that make The Way of Kings so worth reading.

With the vast amount of characters, Sanderson often shifts perspectives every chapter. It quickly grows frustrating, and I found myself skipping ahead during tense scenes to see how the characters were faring. Yet, despite most of the characters being likeable and easy to root for, Sanderson also seems to be the master of misdirection; he allows the reader to grow fond of certain characters, and in only a few shocking lines of text, reveals the true villainous nature of them.

The last few hundred pages of the book are when it goes from good to great, with everything starting to come together. One of the main plot points is revealed and while loose ends are tied up, there are still endless possibilities for the sequel, Words of Radiance.

The Way of Kings is a monstrous 75-chapter novel, yet it barely scratches the surface of what the series has to offer. For those who are willing to put in the time and effort it takes to finish this book, it’ll prove to be a worthy read.