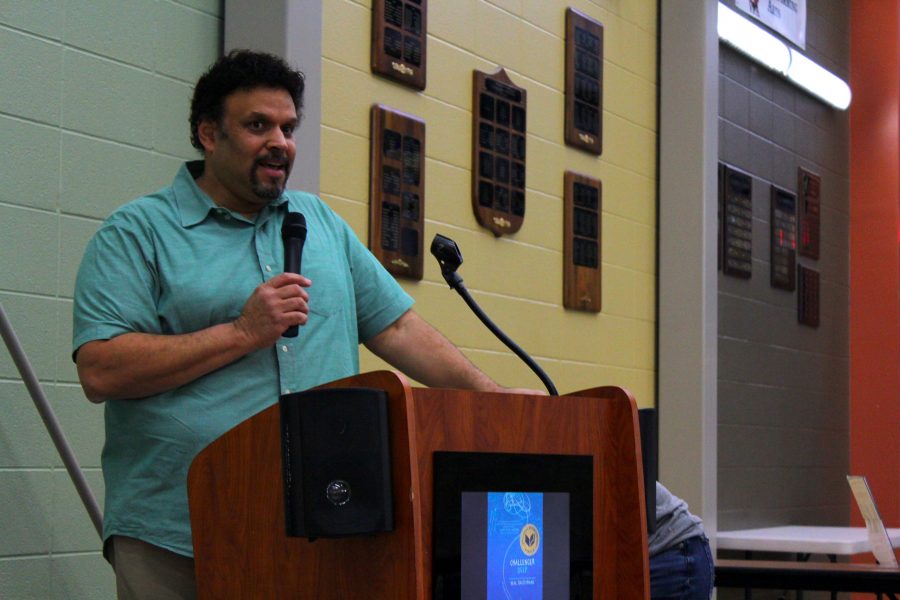 Students were offered a unique opportunity to meet with award-winning author Neal Shusterman on Friday, Jan. 13 at 8 a.m. in the atrium. There, they were able to ask Mr. Shusterman questions about his newest book, Scythe, as well as his previous works.

“I was really excited to see just a big author,” Kate Lee ‘19 said. “He’s written a ton of books, and he’s also a really big author nationally. I remembered that I read his book Unwind a long time ago, maybe three years ago, so I decided to go.”

The visit began with Mr. Shusterman reading the first few chapters of Scythe. Afterwards, students learned about various aspects of Mr. Shusterman’s writing, ranging from the publishing and writing process to the source of inspiration for his books.

Rather than writing about the usual dystopian world, Mr. Shusterman chose to delve into a perfect world where he could express the downfalls of a perfect world in his latest book.

Scythe explores an utopian world where an artificial intelligence known as the Thundercloud, filled with all of humanity’s knowledge, functions as a government. The Thundercloud has managed to eradicate death itself, yet in order to thin out the population, people are randomly chosen for ‘gleaning,’ or killing, by a Scythe.

While Scythe brought out the possibilities of a model world, Mr. Shusterman’s best-selling novel Unwind showcases how divided societies will make terrible decisions. Inspired by news stories of rebellious teenagers in England, Unwind features an unsettling world where parents have the choice of disposing of their kid and using their body parts for transplants once they reach the age of 13.

“Unwind is disturbing, it’s intended to be disturbing, and it’s supposed to really shock you into thinking about our society and the way we make decisions and how things go wrong in society,” Mr. Shusterman said. “And, the only way that we are ever going to make decisions that don’t [cause such consequences] is to rise above it, and to start looking at things in different ways, from a new perspective that doesn’t divide us.”

After discussing his works, which include book series, as well as movies and TV shows, Mr. Shusterman moved on to his publishing process. Though his first two books were rejected repeatedly, Mr. Shusterman finally found success after contacting an editor who left a particularly kind note about his second book. His third story was published by Little, Brown and Company, and his works have only progressed from there, with books in different genres, movie scripts, and even board games.

“I think what stood out to me the most was just that he said like if you’re trying to publish a book or basically pursuing something you really want to happen, don’t necessarily always follow the conventional way of doing things that other people might say,” Lee said. “You can create your own path to your own type of success.”