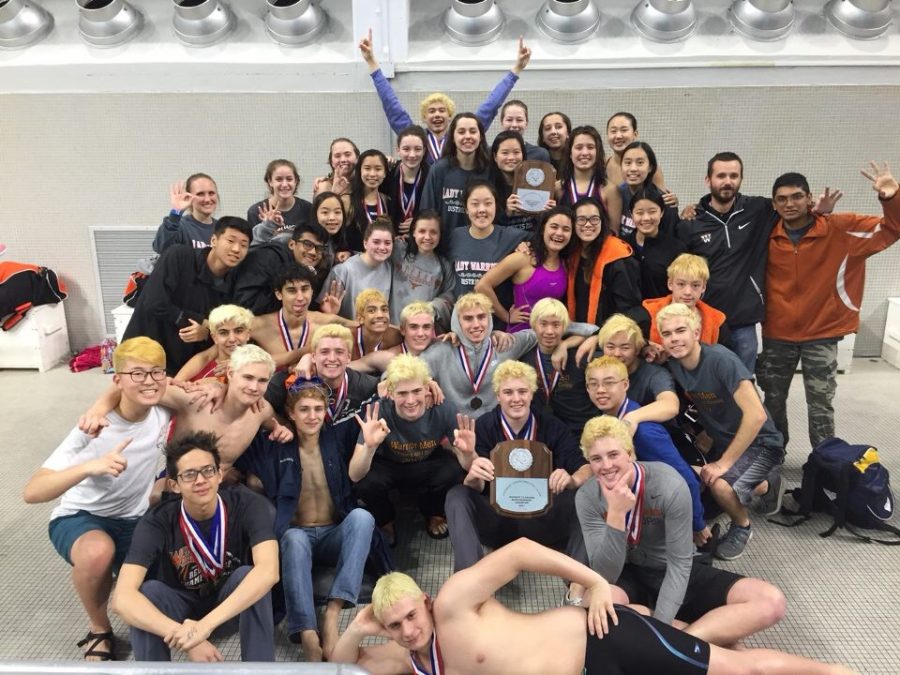 The swimmers pose with their plaques after a successful district meet. Photo courtesy of Westwood Swim and Dive.

The swim and dive team found success as they came out on top at the District 11-6A Championship Meet on Friday, Jan. 27. The boys’ team finished first at the meet and beat out six other schools for the title, while the girls finished second and received a runners’ up title.

Two months prior to the meet, the Warriors changed their practice schedule to ensure they’d be in the best shape for their races.

“Basically we had a few weeks of intense training, and then we moved onto having tapering, where we got easier and easier leading up to our championship district meet,” Eli Blinchevsky ‘19 said.

With the help of their teammates cheering them on, several individual swimmers took home district titles. Those who finished top three in their event received a medal, summing up to 43 total medals for the team. Swimmers who finished among the top six of their event will also advance to the regional meet.

“I’m pretty satisfied, especially with the boys performance because this is our eighth year in a row being district champions,” Ryan Cain ‘17 said.

The team is able to bond from several different traditions to display their spirit at meets like these. Boys bleach all of their hair, while girls bleach the tips. During the meet, swimmers will also stand around the pool with the Warrior hand symbol and bring it down as teammates dive in to show their support.

The Warriors will next compete at the Region 3-6A Championship Meet on Friday, Feb. 3 and Saturday, Feb. 4 in hopes of securing a spot at the state meet.