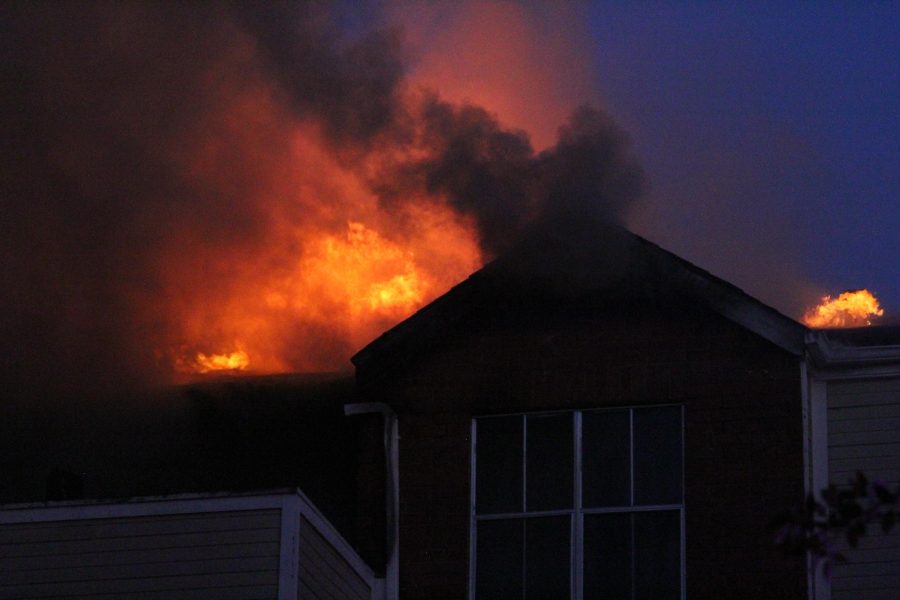 One of the complexes at Westwood Apartments erupts in flames and smoke.

The Westwood Apartments, located across the street from the school, were the unfortunate victims of a massive fire on Thursday, March 30. The flames started on the third floor of building number 3 and quickly engulfed the entire structure. Many police cars and firetrucks arrived in the midst of the chaos to help residents and to make sure the fire didn’t spread to the neighboring buildings. Around 16 units were destroyed, causing 43 people (none reported injured) to be without a home.

“I was at the lacrosse game, and I saw one fire truck come there was no smoke. Then there was smoke, and it started getting bigger, and you could see the flames. When we saw the flames, that’s when my friend and I went over there, but they wouldn’t let us film so we couldn’t take any pictures,” Evan Johnson ‘20 said.

Johnson went on to describe what caused the fire as well as what the residents were doing during the incident.

“There was a girl who came out, and said that her [pet] died, and she was crying it was really depressing. A lot of the [residents] didn’t go anywhere– they just watched it burn. They said it was an electrical fire [that]  caught in the wall that’s why it was so big, and it caught in the air vents,” Johnson said.

There was quite a bit of confusion– most people were unaware of what was happening, including some of the residents.

“I was concerned because my friend lives there, and I didn’t know what was going on so I called her from the gym. She had no idea it was even going on, and I rushed over there,” Miranda Jaramillo-Cuevas ‘18 said. “The smoke was coming as if the fire was already put out, but when we got over there it was bursting into more flames from the inside.”

After news of the fire circulated to students and staff, the school has come together to dedicate efforts to help those displaced by the fire.

“First and foremost, the fire has impacted not only Westwood High School students, but also middle and elementary school kids who will be future Warriors. I love having my Westwood ‘W’ group of all the club presidents because we all got together and planned what we needed to do,” Principle Mario Acosta said. “We’re fortunate because we have great student groups here who are very ready to help. These are our families, our neighbors, and we all live together in this community, so it’s important that we come together and help these students that have been impacted.”

National Honor Society (NHS) has shifted the focus of their canned food drive to support the victims of the fire, and all students are encouraged to give to the donation drive set up by the school, which will accept any essential household items such as toiletries, school supplies, backpacks, blankets, and clothes.