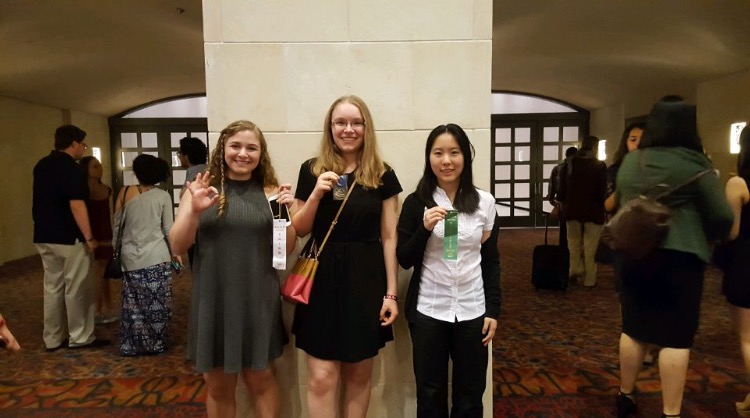 National Spanish Honor Society (NSHS) showcased their Spanish skills at the 2017 Pan American Student Forum (PASF)  in San Antonio from Friday, March 24 to Sunday, March 26. PASF serves as a student-based convention that highlights Hispanic culture and language. Students compete through written examinations and are given the opportunity to participate in various workshops that exemplify different parts of Spanish culture. This is NSHS Sponsor Sra. Llanos-Gremillion’s eighth time attending the convention with her students.

This year, 15 Westwood girls decided to partake in the competition, leaving by bus to San Antonio on Friday morning and returning after a two night stay. On Friday night, after the reading and listening examinations, students attended the Noche Panamerica, where various schools performed traditional Spanish dances and skits.

“I think that the Noche Panamerica was definitely my favorite activity because we got to see kids our age performing so many cool dances,” NSHS Treasurer Mayurika Gupta ‘18 said. “You could tell that they had put in a lot of hard work and it was really fun to watch.”

On Saturday, in the midst of vocabulary and grammar competitions, the convention put forth a multitude of Spanish workshops held by each school to demonstrate the 2017 PASF Theme, Tejas. Fittingly, Westwood students held a workshop called “La Flor De Tejas”, where they showed audiences how to make paper bluebonnets.

That day, NSHS went to a local Mercado, or market, where they found themselves immersed in a spanish-speaking world. “The mercado was so interesting because it felt like we had suddenly entered México,” Gupta said. “The atmosphere was really cool and we had a lot of fun.”

At the awards ceremony Saturday night, NSHS collected a total of three awards, with Sarah Romanko ’18 and Alexa Pena ’19 securing first and third in the reading exam, and Brittany Lee ’17 winning honorable mention in the vocabulary competition. After the ceremony, the convention held a dance for all students.

“My favorite part of it was probably getting to be with other students at the dance on Saturday night because we all got to come together and it was really fun, and we got to make new friends. The workshops were also really fun because we got to engage with other students and do fun activities that relate to the history of Hispanic culture,” Stephanie Jbeily ‘19 said. “This was my first year going to PASF, but I definitely plan on going again next year.”