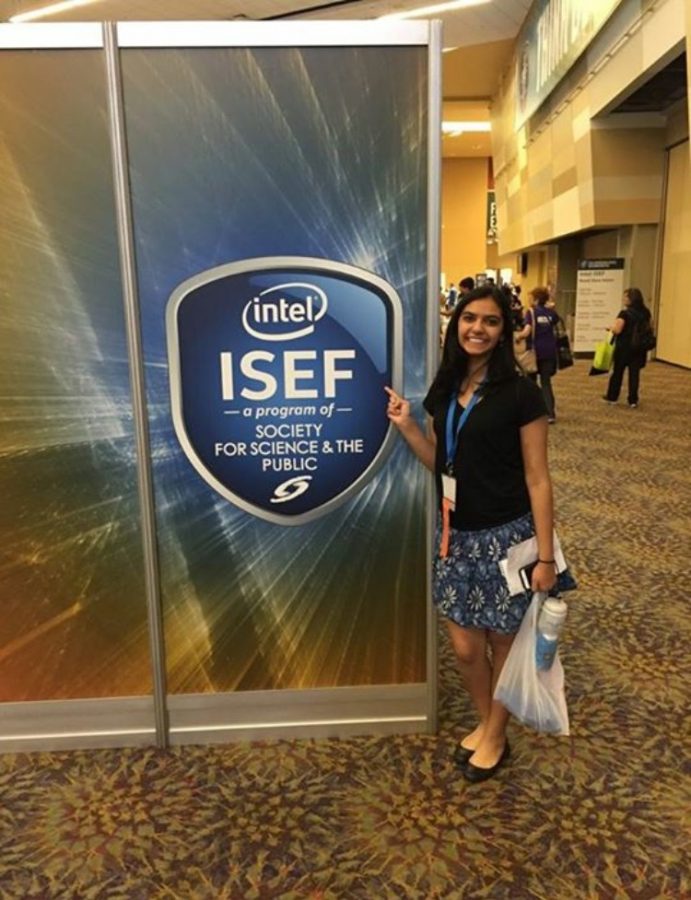 Joshi poses in front of an ISEF board in Phoenix 2016.

Indistinct chatter carries through the air; students mill around in formal attire, nervously fidgeting or standing astutely in front of judges. The hall is a sea of tri-fold boards filled with meticulous research, journals with careful observations, and odd student-built contraptions. For Rucha Joshi ‘18, this atmosphere is nothing new. As a best of fair winner at regionals and a special awards winner at the Intel International Science and Engineering Fair (ISEF), she surveys the scene with confidence and stands proudly in front of the project she has spent weeks perfecting.

Joshi has participated in science fair since the mere age of five, and claims her elementary school experiences are what piqued her curiosity in science as it relates to the world. She will now compete at ISEF for the second year after becoming a 2016 international winner.

“I’m mostly interested in the Computer Science/Engineering fields because I love the logical and problem-solving aspect to it,” Joshi said. “ Many people think it’s a dull field, but that’s not true at all — solving real world problems requires a great deal of creativity in the solutions, and coming up with algorithms is all part of the fun.”

Joshi’s project from this year encompassed her passion for computer science, as her work aims to find all possible disruption zones in networks (or possible places where a disruption can occur) and possible paths that bypass the disruption to connect one device to another.

“My project was called  Power-efficient, Delay and Spatial Error Tolerant, Dynamic 3D Network Analysis. This sounds super complicated, but really it’s just about finding power-efficient routes to take between a 3D, dynamic network,” Joshi said. “The algorithm was implemented in Java and I’ve run it on simulations regarding military and weather networks.”

After sweeping the competition at regionals in 2016, Joshi traveled to ISEF (held in Phoenix, Arizona) to compete once again. At ISEF, about 1,800 students from more than 75 countries around the world gathered to explain their research and compete for prizes. It is a week long event where students can mingle at the various mixers, opening ceremony, and awards ceremony.

“ISEF has been one of the best things that has happened to me. It was honestly one of the most enlightening and moving experiences I’ve ever had and I’m excited to go there again this year,” Joshi said. “I also love presenting to other people. It makes me even more excited about my project when I explain it. Even conversing with the judges during the competition is fun because both of us love the subject and can teach the other something new, like with the judges giving tips and ideas on how to improve the project.”

As a result of her wins at regional and the presentation of her research at ISEF, Joshi won an award for outstanding project in the systems software category from Oracle Academy, and Second Place Award from NSA Research Directorate at the special awards, third place during the Grand Awards ceremony, and an all expense paid trip to tour CERN in Switzerland from European Organization for Nuclear Research.

“The Switzerland experience was absolutely incredible. I met nine other talented individuals and it felt like we’d known each other our whole lives. We all had the opportunity to tour CERN, which is the world’s largest particle physics laboratory and operates the Large Hadron Collider,” Joshi said.”We also met with their renowned physicists, saw their devices such as the original Synchrocyclotron, and toured around Switzerland in general, visiting Lake Geneva and going on chocolate tasting tours.”

Joshi references the trip as a once-in-a-lifetime opportunity and one of her all-time favorite experiences.

“My favorite part was meeting other people and being inspired by them and bonding over our love of science. Meeting people from other countries and realizing they’re not so different from you is incredibly enlightening,” Joshi said. “I honestly look up to each and every person I met.”

This year in May, she will once again travel to the ISEF convention in California to compete and share her project. However, creating and completing a project is no easy task. Joshi dedicated 5 months of her time to research and computation.

“My least favorite part of the experience is definitely how time consuming it is to work on the project and balance school/extra curricular work as well,” Joshi said. “It does get really difficult to handle everything, but I feel like in the end it’s all worth it.”

Her efforts certainly paid off, as Joshi was given the opportunity to present her research at the NSA in addition to traveling to Switzerland.

“I toured the NSA facilities and and spoke with their scientists and agents,” Joshi said. “This was also incredible because it really shows all the doors that computer science can open for someone.”

Joshi regards her involvement at science fair one of the defining moments of her high school career, as it is an experience she will always be grateful for. She encourages incoming freshmen to also consider participating, advising them to present work they feel passionate about.

“In my opinion, attitude is 50 percent of achievement — your excitement about the topic will excite the judges and show what a great scientist you are,” Joshi said. “The atmosphere at Westwood is really encouraging towards involvements in STEM based clubs. I think we as students should be sure to take advantage of that encouragement and focus our efforts where we are interested, because that always yields the best result.”

“I dare you to look around and notice something that is not related to STEM — this field is so critical because it touches everything in our lives,” Joshi said. “Students should focus on STEM activities because they encourage creative thought and give students a chance to make a lasting impact on our world.”