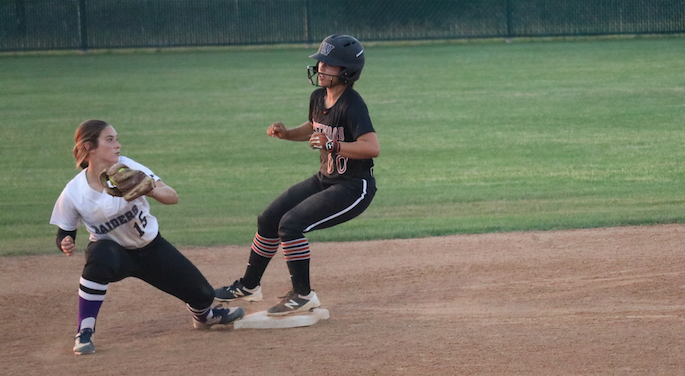 After enduring a vigorous season composed of hard work, big wins, and sorrow losses, the time has come for the varsity softball team to hang their bats and return from the field. In their final game of the season, the Lady Warriors fell short to opponent Cedar Ridge High School in a 1-2 game Friday, April 21.

For the first two innings, the Lady Warriors’ defense held the Grey Wolves 0-1, but were unable to bring in any runs offensively. Within the bottom of the first inning, Cedar Ridge came home unnoticed by the Lady Warriors. Their mistake, however, was quickly made up for and the team was able to pull out of the inning. A line drive caught by shortstop Charese Wyatt ‘17 and a ground ball played at first base by third baseman Courtney Ogle ‘17 made the final two outs for that inning.

“We shut them down and didn’t allow as many runs as the last time we played them,” first baseman Lizzie Taylor ‘18 said. “We have definitely improved since then.”

Despite their aggressiveness in the box, the Lady Warriors struggled to get on base. Only second baseman Jena Hawks ‘17 was able to come to first. Upon transitioning into the bottom of third inning, Cedar Ridge advanced a run, dominating the Lady Warriors 0-2. A line drive to Taylor ended the Grey Wolves’ chance at bat.

“I’m upset the season’s ending and that we’re not going to playoffs, but we fought hard and kept a strong offense and defense tonight,” right fielder Chelsea Terranova ‘19 said.

A deep hit to center field allowed Wyatt a double. Wyatt was advanced to third by Ogle and finally brought in on a pop up hit by catcher Gabby Garcia ‘19. With the score at1-2, the Lady Warriors and Grey Wolves were forced to battle out the final two innings. In the top of the sixth inning, Haley Popelka ‘18 came safe to two with a big hit to the fence,  though fans were disappointed it did not clear the fence. Two pop ups caught in the air and a strikeout did not allow Popelka come home, and neither team was able to score an additional run. The game ended 1-2 in Cedar Ridge’s favor.

“It was a great way to end, even though we loss,” head coach Tiffany Gates said. “I was so proud of the way we played the first place team in our district. I think it will allow us to see our potential for the future.”

Toward the end of the night, the team expressed great sorrow for having played their final game with the team’s seniors: Wyatt, Ogle, Hawks, and center fielder Schylar Stockwell. Tears, hugs, and final “good game’s” were exchanged following their last high school game.

“I love our seniors,” Taylor said. “We have become such a tight knit group and it’s going to be hard to let them go. We’re going to miss them so much.”