Varsity Volleyball Slips Past the Hawks 3-2 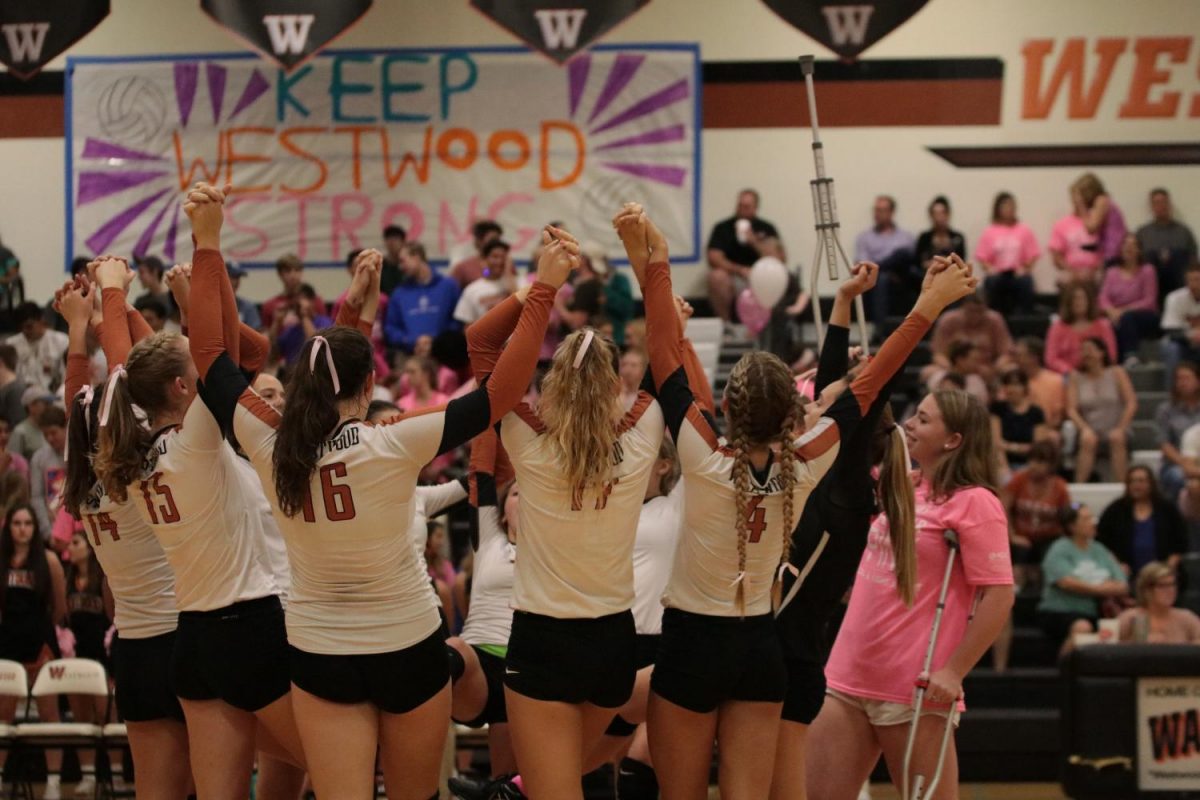 The team gathers before the game to prepare for their game against Hendrickson.

Going into the game with a 5-1 district lead, the Lady Warriors varsity volleyball team added another win to their list on Friday, Sept. 29 against the Hendrickson Hawks. In five sets, the Warriors proved their dedication and will to win, even against the most matched up team as the entire audience sat on the edge of their seats, winning 3-2.

The Warriors started slow in their first set, allowing the Hawks gain several points before the Warriors began to catch back up. A kill on the line by Maddi Kriz ‘19 put the ladies back on track as the crowd cheered in excitement. Maggie Stout ‘19 gained another point with a roll shot directly over the block; the hit landed too short for the Hawks to react quickly enough to. Stout immediately came back with an outside hit that shanked off the defensive player’s platform. This put the score at 10-9, the Warriors only down by one point. Jenny Todd ‘19 stepped onto the court with an immediate ace, followed by successful plays by the rest of the team. Emily Low ‘18 and Kriz set up a tall block in the middle which prevented the Hawks from scoring, which made the student section yell in excitement. Libero Lauren Gregorczyk ‘18 served an ace tying the score 15-15, and came in again with a bump set to Kriz who killed it cross court. With three kills in a row, Stout demolished the scoreboard and put the Warriors in the lead 22-18. With a tip from Audrey Quesnel ‘20 and additional hits from Stout, the team pulled out the first set winning 25-20.

The second set unveiled a greater challenge of communication among the Warriors, putting them down several points throughout the match. The team started slow again, but picked up the pace when Low and Kenzie Beckham ‘21 blocked a hard hit by the Hawks, but still down 14-9. Low earned points with a tip over the block and a hit cross-court one right after the other, now 17-12. Cassie Jackson ‘18 demonstrated skill on the right side with kills down the line. Gregorczyk made safe calls for the ball out-of-bounds, keeping the ladies in the game, just short 21-19. Beckham saved the ball with the only pancake of the game, which caught everyone by surprise, but the team was unable to gain the point. The Hawks won the second set 25-21.

“I think our defense was good, but we struggled a lot in serve-receive,” Gregorczyk said.

Beckham took the court with the first serve, instantly serving an ace which gave the Warriors the first point of the set. Stout played back row and scarcely rolled the ball over the net for another point (2-0). Jackson and Stout both killed the ball down the middle to catch up to the Hawks, now leading the score 7-5. Kriz covered hitters while in the back row and saved the Hawks short tip while Todd stepped into to assist set Kriz and gained the point; the Warriors currently up 15-9. Beckham served yet another ace for the team, keeping them in the lead. The Hawks proved to be matched competition for the Warriors, as they teetered back and forth between points after Jackson tipped over the net for a score of 18-15. Stout killed the ball in a deep corner to keep the Warriors lead, 23-18. A missed serve by the Hawks cost them the set, but made the entire Field House shake with screams from the Warrior fans.

The fourth set showed the Warrior’s diminishing demeanour, giving the Hawks easy points in the start for a lead. Gregorczyk ran across the court to save a shanked ball from her team several times, enabling the Warriors to keep and gain the point from the Hawks. Kriz stepped in with a free ball she passed from behind the back lines of court. With the help of Jackson in Kriz’s save, the ladies tied at 5-5. Todd dove for a short tip that wasn’t expected to be picked up, and received the point at the end of the rally to inch closer to the Hawks leading score of 14-8. She came in again with an ace to slowly catch the team up. Players like Gregorczyk, watched the ball all the way out instead of making loose calls that forfeit the point to the Hawks. Jackson and Low demonstrated a tall as well as exceptional double block, putting the Warriors down by only two points, 23-21. Beckham then served two aces, putting the score 24-23. The Warriors only needed one point to win the entire game, but missed a serve that tied them at 24-24, forcing them to continue playing until the Hawks won by two points, 26-24.

“We excelled at being more like a team. Every point we earned we cheered as loud as possible for each other,” Low said. “The most memorable play was when a shanked ball went to the very back wall and Maddi passed it and managed to keep it in play.”

The fifth and final set was only decided to go to 15 points. This meant the Warriors would really have to fight for every single point. They scored the first five points with no competition, but a missed serve cost them their streak. Each player on the Warriors court illustrated tremendous cooperation and determination as they slowly racked up points for a continued lead. Low had a classic kill from the middle. Quesnel and Kriz put up a successful block. Kriz hit into the Hawks block the next play to lose the point at 14-10, but the opponent missed their serve and the Warriors won the last set 15-10.

With a laugh, coach Tara Nelson described how the game went overall:

“A win’s a win, so obviously I’m very happy they pulled it out, but I wish we played more consistently,” Nelson said. “They love to keep things exciting and keep me on my toes, but the most important thing is that they closed it out and finished. I’m really proud of them for doing that, especially as such a young team. It’s tough to battle back and forth and come out with a win.”

Join the Lady Warriors for their next game against the Pflugerville Panthers on Tuesday, Oct. 3 at the Field House. Go Wood.