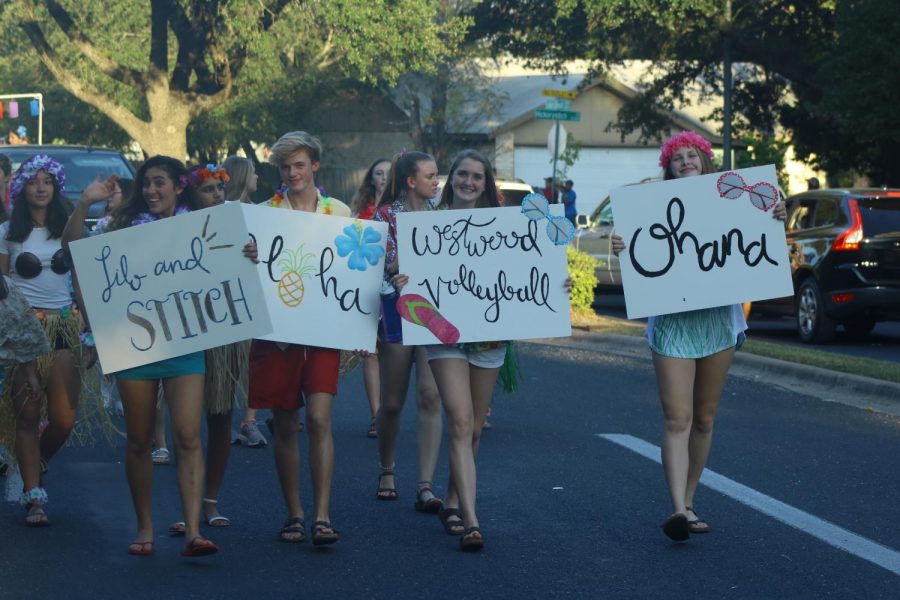 The volleyball teams dress up as Lilo and Stitch for the parade.

To kick off the Homecoming spirit, the annual parade was held on Thursday, Oct. 12 after school to showcase all of the organizations. The parade lasted for 45 minutes as all the floats rolled around the neighborhoods.

The floats had been decorated by each organization, to be voted on by judges that sat near the middle of the parade route. The decision for the best float was announced at the pep rally, which took place directly after the parade.

“It was really fun to decorate and work with my classmates on the floats,” Eesha Nayak ‘19 said. ”We all got to bond and share our ideas of how we wanted [the float] to look at the end.”

The students gathered into the football stands as organizations for sports lined up along the edge of the field. To start off the pep rally, choir sang the national anthem while ROTC gave a salute. Afterwards, a performance was given by the cheerleaders, showing a variety of flips, jumps, and kicks in the air. The dance teams, Warrior Pride and SunDancers, followed immediately after to kick off the school spirit.

“Since it was our first performance for the season in front of everyone, it was really scary yet fun,” Navya Neerukonda ‘19 said. “It was a really fun day because I got to dance with my teammates.

After the performances, the Homecoming beaus and sweethearts were announced. Each nominee walked onto the field, alongside their date. Students screamed and clapped for each person as they walked down the field. The pep rally ended with the announcing of the winner for the best float: the varsity volleyball team for their Hawaiian theme.

“The parade and pep rally were really cool because the whole community was involved,” Sara Miranda ‘19 said. “It’s great to see everyone so excited before the Homecoming game and dance, and the pep rally, and parade is a key part in making everything a lot more fun.”