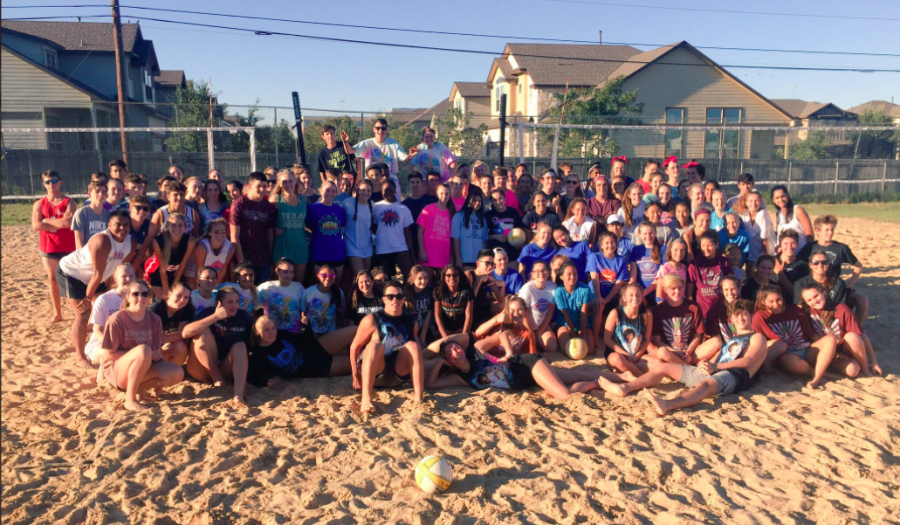 The participants of Spike Fest pose together on the sand courts. Photo credit to Westwood Volleyball.

The Westwood volleyball program held their annual Spike Fest tournament on Tuesday, Oct. 17 at the sand courts. Students were encouraged to bring a team of four to enjoy some friendly competition and fundraise for the courts.

This was the first year the fall Spike Fest was held as a fundraiser for the program, as the sand courts were only completed last year. Each participant brought five dollars to help support the costs of maintaining these courts.

“Our initial Spike Fest [last year] was actually a ribbon cutting ceremony, and it was free for all students to come check it out and put the word out that we have these courts,” head volleyball coach Tara Nelson said. “Now we just use it as a fundraiser because we don’t have any money for maintenance; the money the program makes from this we’re able to put some sand back in the box when it gets really shallow.”

For the competition itself, each of the 32 teams of four played in two rounds. The 16 teams earning the highest points went on to the winners’ bracket, while the other 16 teams continued into the friendship bracket. Teams also stayed after to enjoy a queen of the court style play.

“Our team did pretty good, we got to the winners’ bracket the first round and we got third or fourth,” Jake Morrow ‘19 said. “It was just a super fun time and I’m really glad volleyball did this.”

Volleyball players were able to reach out to the community to raise awareness about the sport. Students, parents, teachers, and other members alike were all seen competing at Spike Fest, some even donning matching costumes to show team spirit.

“My favorite part is how people outside of volleyball are playing, and the rules are kind of not so strict, so it just made everything really fun,” Madeleine Shrull ‘21 said. “It shows that volleyball’s doing something; we’re a valid part of the school. Our hard work and fundraising has paid for these courts, and I think it’s good for the school to see.”

Spike Fest not only contributes to the program through funds, it also allows others to develop an interest in the sport to help support the teams themselves.

“We want people to enjoy volleyball and come to our games,” Coach Nelson said. “It’s fun to watch and maybe have a personal experience with the sport, so this is their opportunity to kind of see what it’s all about.