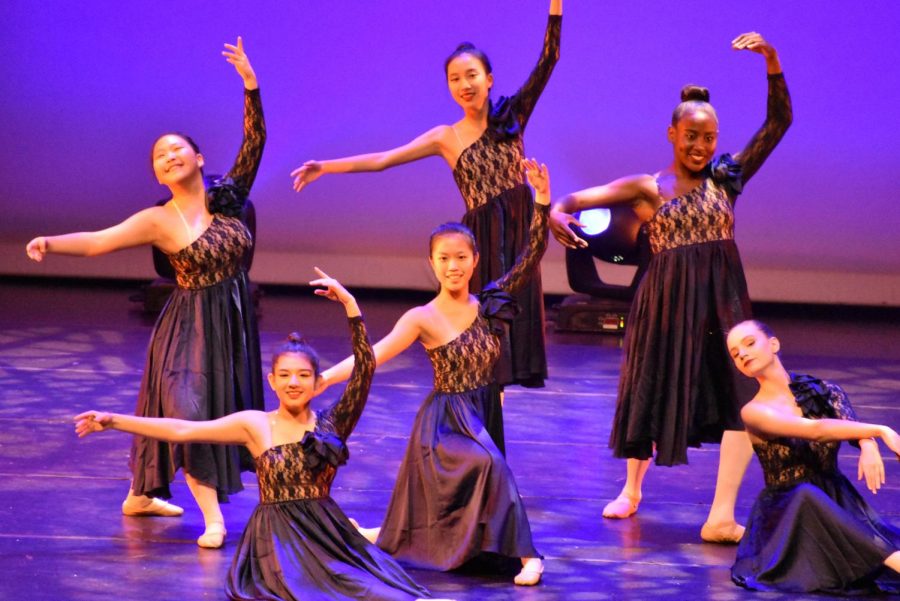 Ballet III/IV pose at the end of their dance titled 'Compte'.

Students worked on the dances for approximately a month, planning out costumes and dress rehearsals. After their long preparation, the dancers were able to show the audience what they had worked on.

“It took us a month to learn the dance and at first, it was slow, but then it got easier as we went along because it was just more about polishing and memorizing, ” Sophia O’neal ‘20 said. “Dress rehearsal helped with spacing because we didn’t know what the spacing on the stage was going to be like, so [in dress rehearsal] we got to figure that out before we got on the stage.”

“I’m in Ballet I/II and I chose to take the class because I’ve been doing ballet for some time so I thought I could continue it,” Sahanna Thangadurai  ‘21 said. “[Intersection] was a really pleasant experience. We didn’t mess up so we all felt happy.”

“My parents and my friends came which made me kinda nervous because they were watching me,” Haeun Kim’ 20 said. “However, it was still fun to show them the dance I’ve been working on for months.”

The next large dance performance at the PAC will be the spring show, Escapade, where all the dance classes including SunDancers, cheerleaders and Warrior Pride will showcase their talents. Escapade is set to take place on April 6-7.