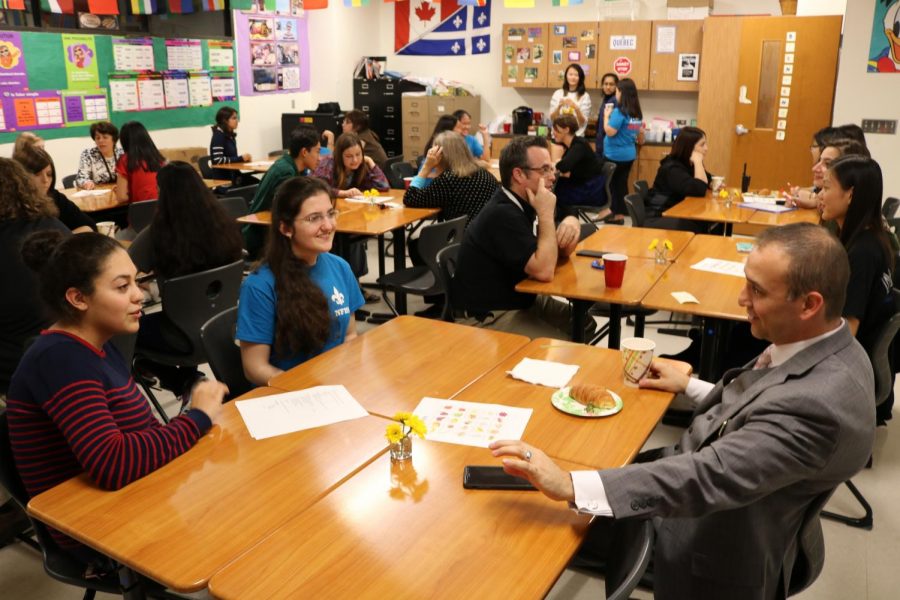 National French Honor Society (NFHS) hosted their first Salon de Conversation on Wednesday, Nov. 1, where students were able to provide staff members with an introductory lesson to the French language.

Staff members were greeted with French pastries and plenty of bonjours as they entered, and were led over to the pair of students who would be teaching them. All participants seemed to share an eager interest in learning the language.

“Personally I was interested because I wish I knew any other language besides English; I’ve always wanted to learn French,” International Baccalaureate (IB) Coordinator Stephanie Childress said. “Plus there were so many IB students and so I wanted to interact with them.”

After introducing themselves to each other, students were able to transition into beginning the lesson. The Salon de Conversation focused on how to converse in French, therefore daily greetings and exchanges were taught, as well as other phrases to discuss food, family, and hobbies.

“In the beginning, I didn’t know how to start, but once I started saying words and having her repeating it, it was super fun,” Sara Miranda ‘19 said. “Especially when you have someone who’s interested and has certain things they want to learn, then you can teach them and watch them learn.”

The event proved to be an interactive and fun way to share knowledge of the language within the learning community, while also giving students the chance to teach their teachers for a change.

“I was really interested in doing this because I feel like it’s a way for me to remember my beginning French,” Miranda said. “Also just practicing with other people and spreading the love of the French language was really fun.”