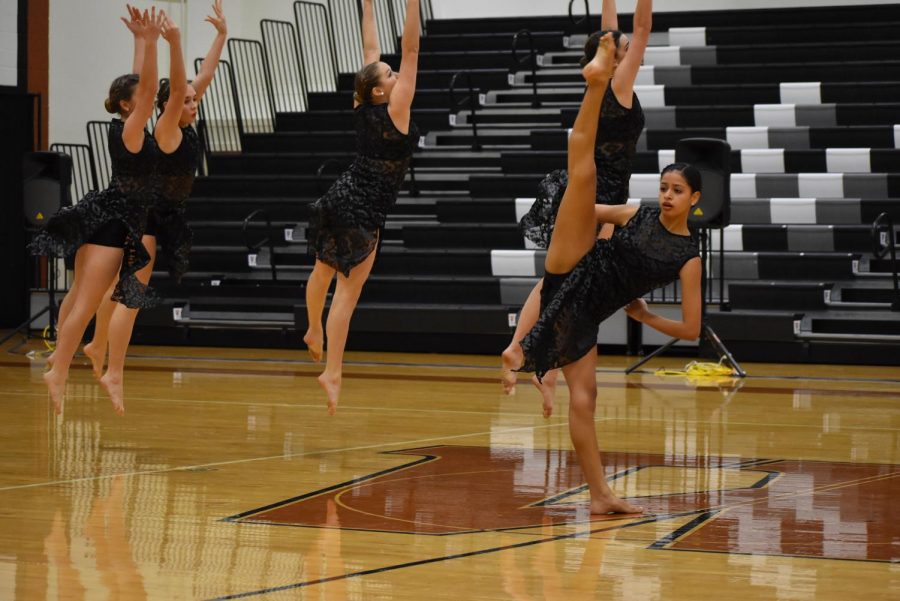 Line Officer Susi Chavez '19 executes a tilt as part of her solo.

The Westwood Dance Classic, an annual regional dance competition held by the SunDancers, took place on Saturday, Feb. 11. Dances began at 7 a.m. and the event ended at 11 p.m. with the award ceremony. With the help from Baby SunDancers, the event was able to run smoothly.

“Knowing that it’s my last time performing at WDC is kinda bittersweet, but it was a lot of fun,” Thyra Funderback ‘18 said. “It was such an exciting event that made us work together as a team to make the dances look good.”

Although SunDancers weren’t allowed to compete as a team, individual solos were allowed. Out of many solos, the judges picked finalists, awarding them with medals, and a plaque for the first and second runners-up. Ella Loper took first place, receiving a fifty dollar check.

“I was really surprised and excited [winning my competition]. I wasn’t expecting it at all,” Ella Loper ‘20 said. “I learned my solo in July, so I have been practicing it since then.”

In addition to solos, Warrior Pride performed two dances, hip hop and contemporary, winning first place in both. They also received the precision award, having a total score for all of their dances over 90.

“Since we have been preparing for a while, It felt good to see our hard work pay off,” Divya Nair ‘19 said. “We were all pretty nervous before performing, but we were relieved once we heard we were first.”

The full list of awards for Westwood can be found below.