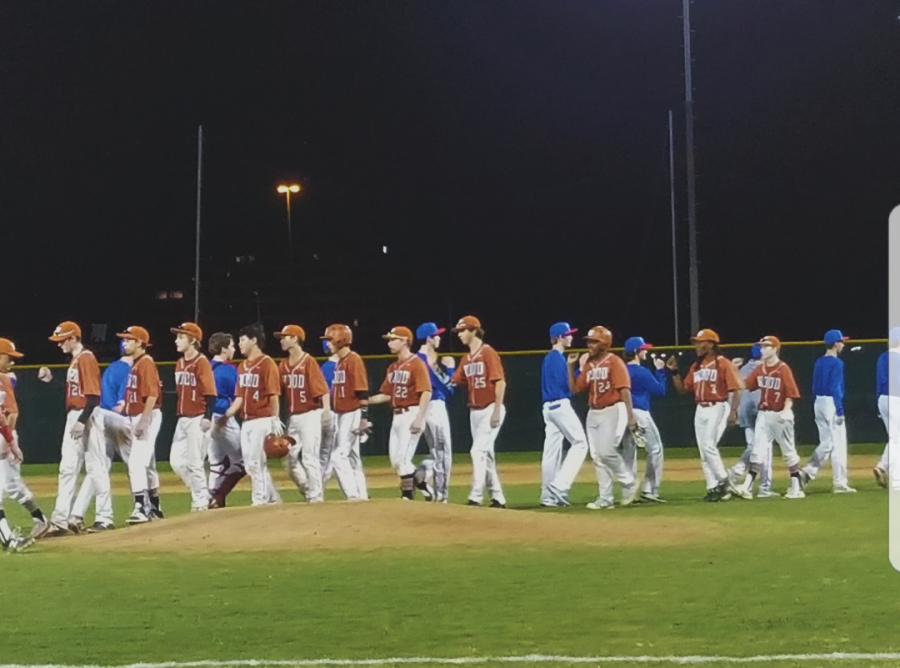 Warriors shake hands with Chaps at the end of the game.

Despite their high hopes and best efforts, the Warriors’ JV white baseball team fell short 7-0 to the Westlake Chaparrals on Friday, Feb. 16. While the Warriors held a steady defense later in the night, their struggles coming up to bat made for a disheartening game for the Warriors’ fans.

The first inning was a struggle for the Warriors defensively and offensively. Starting off with the Chaparrals at bat, shortstop Matthew Ji ‘21 fielded and threw a runner out at first base. After the next batter was walked, the Chaparrals hit a double, bringing him home and scoring the first run of the game. The same Chaparral player then stole third base before another one of their batters was walked. The Warriors attempted to throw down to second when the Chaparrals were coming in to steal. But ultimately, they missed the play, making him safe at second and allowing the runner at third to come home. The next batter made a sacrifice bunt and was thrown out at first whilst another Chaparral runner at third scored. Finally, the Chaparrals last batter of the inning hit a single that let their team bring in their fourth run. With the Warriors now at bat, the bottom of the first inning didn’t last long and they were unable to get on base. Two outs at first, and a strike out led to a quick transition into the second inning.

Coming into the second inning, the Warriors substituted pitchers and picked up on their defense. No Chaparral runners got on base. Then in the bottom of the second, C.J. Hill ‘21 was walked. Following Hill, Ji hit a pop-fly that was caught in the outfield. Ji was out but Hill remained safe. Jacob Geist ‘21 struck out but fortunately for the Warriors, Colin Cooper ‘21 hit a single which advanced everyone one base. Despite the bases being loaded, the next batter Carson Haverda ‘21 failed to bring in any runners and was thrown out at first.

“We had some good catches in the outfield and plays at third,” Tyler Gamble ‘21 said. “Simple things like hitting the ball and keeping a positive attitude need to be worked on. Our attitudes weren’t as high at the end of the game.”

In the the third inning, Ji started off by striking out the first Chaparral batter. Nate Anderson ‘21 followed with a big catch in the right field, making the second out. Geist attempted to catch the next hit at third base but was hit in the arm and unable to make the play at first. The Chaparrals made two more singles and brought in one runner, advancing the score 5-0. The Warriors then threw their final out at first and came out to hit. However, two strikeouts and out at one ended the inning quickly.

Now entering the last inning, the Warriors made their third substitution in pitchers. Kyle Ochs ‘21 walked and struck out one batter. Three singles by the Chaparrals allowed two of their runners to score but the Warriors’ catcher Cooper tagged out the final runner at home, leaving the score at 7-0. With the Warriors last at bat, David Grosvenor ‘21 attempted to steal first after the catcher dropped his third strike. Unfortunately for the Warriors, the Chaparrals beat him to first base and he was tagged out. Eric Uffelman ‘21 was out after hitting a pop-fly retrieved by the Chaparrals. Ochs and Astacio each hit a single, however, Astacio was tagged out at second, ending the game 7-0.

“We have a lot to work on, like, catching pop flys and putting the ball in play more often,” Anderson said. “We’re making improvements with more strict practices and more repetition and working on the little things. You know, ‘If you get the little things right, the big things will take care of themselves’ and that sort of stuff.”

The Warriors’ next JV White game will be against the Vandegrift Vipers at home on Monday, Feb. 19 at 6 p.m.. Go Wood.