OPINION: How School Shootings Have Become The Norm In Society 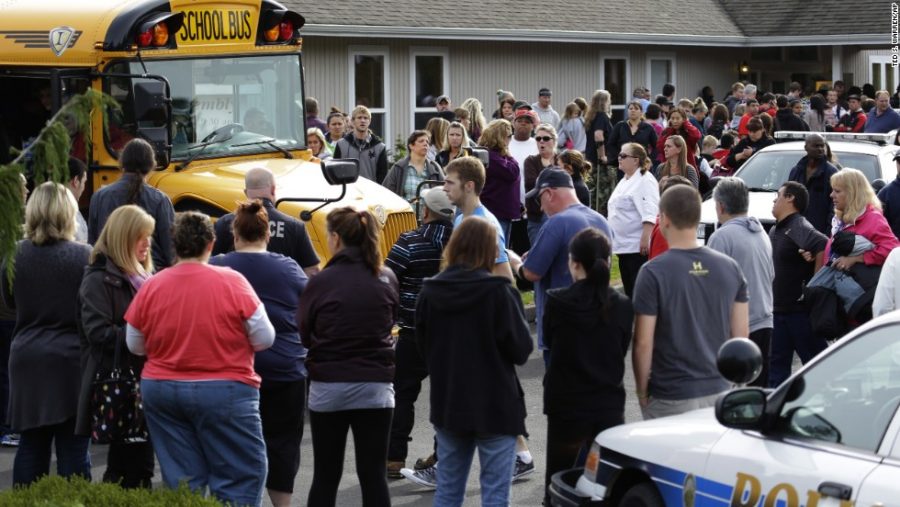 It’s only been 2018 for a little more than a month now, and already a staggeringly high number of 12 school shootings have occured.  Although a few were products of attempted suicides, and others were threats that escalated, they are still categorized as school shootings. And yet many haven’t given a serious thought regarding school shootings ever since the unforgettable Sandy Hook elementary school shooting where 28 children died and many more were injured.

As a nation, we have gradually become more and more numb as we convinced ourselves to accept that this is the norm, mainly due to the fact that we aren’t affected by it personally. We have made so many movies and books, as well as jokes and offhand comments on how people look like “school shooters” orother brainless remarks to the point where we as a country have become increasingly detached from the reality of how escalated this situation has truly become. We have put the right to bear arms above the right to life.  Unsurprisingly, America spends more on our military than any other country in the world.

Since the start of 2018, 25 incidents in the United States have already been categorized as mass shootings (shootings are classified as such if at least four victims are injured or killed at a singular location, excluding the suspect), including one especially horrific shooting that took place in Benton, Kentucky. 23 days into the new year, the saddening shooting occurred at Marshall County High School, resulting in the deaths of two 15-year-old students and leaving 14 students dangerously injured. When I first learned about this particular shooting, it absolutely stunned me. I was led to believe that other students would be discussing it as well, yet no one ever did. There was no mention of it during morning announcements or even a whisper about in the hallways.

Ashley Collie, a sophomore attending Marshall County High School, talked to the Courier Journal about the shooting saying that although he was firing randomly, he was “definitely shooting to kill”. The shooting was one of the dozen that we know of at the moment, showing people across the world how this endless pattern of violence and brutality has become ordinary and expected in the society we live in today.

Instead of immediately responding with gun control proposals, the Kentucky’s House of Representatives instead began with prayers for the dead and injured. However, two members of the General Assembly, Representative Will Coursey and Senator Danny Carroll had actually attended and graduated from Marshall County High School, and both put out heartfelt statements about the shooting. Coursey said that, “As an alum of this high school, I can only add that I am stunned and deeply saddened.Words alone cannot describe the grief our community feels as we try to comprehend this senseless tragedy.” Additionally, Governor Matt Bevin has traveled to Marshall County for a news conference and issued a short sentence in which he mentions that “it is unbelievable that this would happen in a small close-knit county like Marshall County.”

In Texas, a shooting occurred in a small town named Italy just outside the city of Dallas at Italy High School on Monday, Jan. 22., injuring one 15-year-old student. Thankfully, Italy Independent School District Superintendent Lee Joffre said all students were accounted for after the shooting, and prayers circles and vigils were prepared for the victim, as the community of Italy hopes for the best from this terrible situation.

Gabrielle Giffords, a U.S. Representative who is also a survivor of gun violence, took to social media to give her own opinion on the matter. “Our nation’s schools should be some of the safest spaces in our communities,” Giffords said. “It’s horrifying that we can no longer call school shootings ‘unimaginable’ because the reality is that they happen with alarming frequency.”

Even more recently, on Thursday, Feb. 1, two 15-year-old students were shot at a Los Angeles middle school, and three other students suffered from injuries. Apparently, the school has a serious problem with gangs and violence, which somewhat gives a reason to this act of senseless cruelty. However, the interviews of the people at the shooting are so far unclear as to what really happened on Thursday. The suspect’s family has not released any statements at the moment.

These three shootings are just the most relevant and the most fatal, but there have been more. And even though those shootings may have been minor in damages, suicide attempts, or accidents, they still need to be considered and thought of seriously. These nonfatal shootings at elementary, middle, and high schools as well as colleges in states around the nation such as Iowa, Texas, California, and Washington, led to no injuries. However, it instead sent students and faculty into a state of panic and worry, severely affecting the mental states of students.

Katherine W. Schweit, former senior F.B.I. official as well as a co-author on a study of shooting incidents in the United States has commented on these shootings saying that, “We have absolutely become numb to these kinds of shootings, and I think that will continue.”

The nation’s attention is currently focused on situations such as the government shutdown, our current President’s latest antics, or even the Kardashian clans’ latest drama, not realizing the extent of the brutal fatalities throughout the country. It’s alarming to know that as a nation, we think that school shootings are no longer unheard of due to the upsettingly high rate of their occurrences. The stories of these shootings might be all over the internet for a mere week and then forgotten about in the wake of of other shootings.

In 2017, a total of 65 shootings occured on school campuses. This year, 12 have already occurred in the first month. The staggering statistics put into perspective how, in a country where semiautomatic handguns are very accessible, mass shootings, school shootings, and the never ending occurrences of gun violence are now woven into our country’s social fabric. For the people not directly affected by the shootings themselves, we sympathize and become upset for a while, but the shootings are definitely no longer surprising. So, as a school and as a nation, it’s our job to stay informed and up to date as we should never be able to accept these horrific acts of violence as routine in our country.