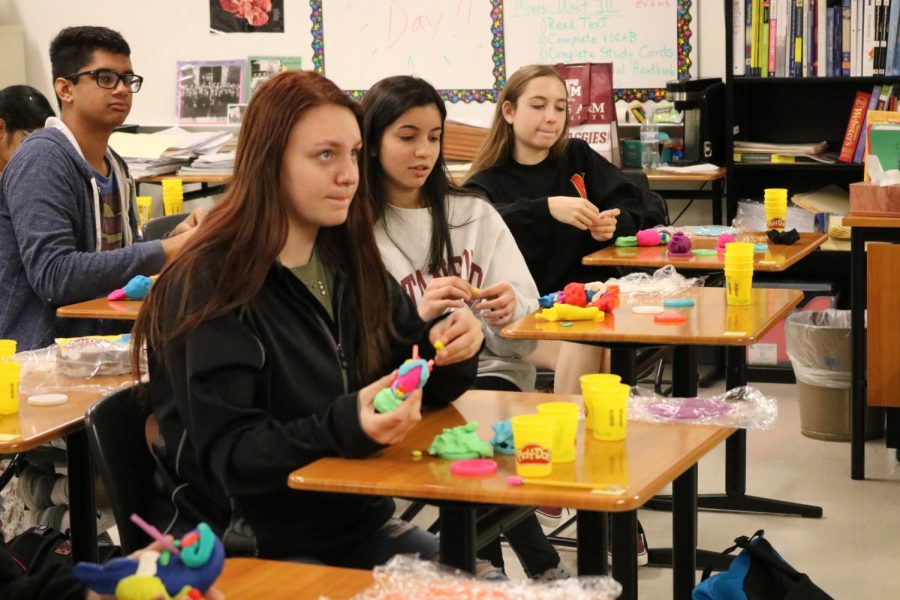 Savannah Brooks '19 listens to Ms. Minter as she tells them the next steps.

Psychology students created Play-Doh brains during their neuroscience unit, enabling them to understand the different functions of specific regions of the brain. This also helped students visualize their own brains and see how they play a role in daily life.

“As we were building the brain, Ms. Minter showed each of us the [Play-Doh] brain and told us its proper function and its shape,” Joseph Abreu ‘19 said. “[The lesson] helped give me a mental image of the brain. I was looking forward to this because we usually do notes in this class and it was a different experience.”

Both psychology teachers Ms. Minter and Ms. Eyob had built up anticipation by mentioning the activity since the first day of school. They had asked their students to bring in their Play Doh on the very first week in order to be fully prepared for the activity.

“Ms. Minter has been mentioning this activity since the beginning of the year, so I was excited,” Michelle Huang ‘19 said. “[Building the brain is] a creative aspect of psychology and is really hands-on.”

After the Ms. Minter’s students finished building their brains and wrapped them in saran wrap, they took them home to be able to remember the activity and the hard work they created. However, Ms. Eyob’s class instead chose to dissect the brain to see the different parts and colors on the inside of the brain.

“People should take psychology because we do more than understand the brain, we actually build it,” Sara Mawani ‘19 said. “With this activity, we are better able to understand the human brain and how it controls the way we behave and socialize.”