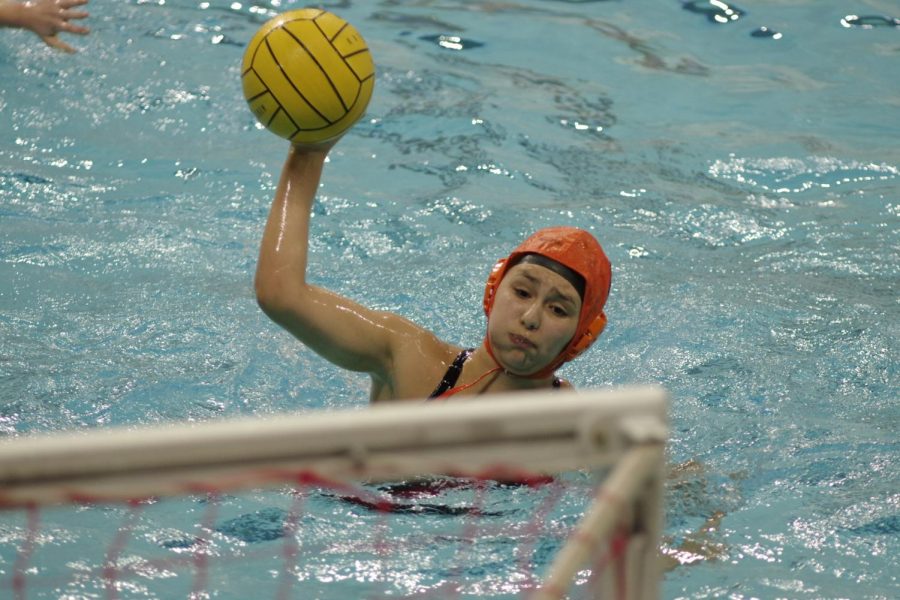 Paige Castillo '20 gets high as she takes a shot.

The girls’ water polo team played Austin High school on Monday, April 2, at Lee and Joe Jamail Aquatic Center. The girls won with an official score of 10-1, although the judges stopped counting the scores in the second half of the game. After making state last year, the girls’ water polo team became an official club this year and welcomed an experienced coach, Pascal Cohen-Hadria.

“We knew we were going to win because [Austin] was ranked ninth and we were ranked fourth so we mostly just concentrated on setting up our positions,” Lucy Moran ‘19 said. “We won officially 10-1 though the ref stopped counting goals third quarter.”

Going into the game with confidence, the girls played hard from the beginning. Emma Greene ‘20 won the sprint right off the start and was able to get the ball to her teammates. Sam Smith ‘19 scored the first goal within seconds into the first quarter. Captain Shannon Berry ‘18 shot many skip shots, making it hard for the opposing goalie to block any attempts. Emily Low ‘18 played the goalie first half of the game was able to save every attempt the Austin players shot at her. Scoring continued throughout the game and the girls’ finished 10-0 after the first half of the game.

“Within the first 30 seconds I made a shot,” Smith said. “We scored a lot and our coach told us to chill out on the scoring so we could focus on the fundamental aspects of playing the games rather than just trying to get the ball in the goal. Some difficulties were the other team was getting very annoyed in the second half so they started to get really aggressive physically.”

Going into the second quarter, Coach Pascal told the team to focus on setting up when they get the ball. After practicing winging out in practices for weeks, that was all Coach Pascal wanted to see, as well as clearing out the center so the person at wing can drive in the middle to get a chance for an easy pass and an easy goal. Pascal told the girls to play as if they were playing against Round Rock, who are currently ranked first and are especially strong in defense. The girls’ were able to steal the ball multiple times and Moran scored more goals in the third quarter. Natalie Caro ‘21 played good defense, preventing the opposing players to pass and shoot.

“We ended up beating Austin High 16-1. We focused on winging out to the side to set up the drives and throwing down to the corners which sometimes worked out, [and] sometimes we forgot to do,” Greene said. “We also wanted to work on getting back on the counterattack and working on press no-foul defense, while annoying the other team into not wanted to be around us.”

Going into the fourth quarter, the girls focused on passing the ball around and defense instead of scoring. The opposing team was able to find a chance to steal the ball and take a shot on Amy Ma ‘19, who took over as goalie in the second half of the game, and scored their first and only goal. Ending the game with an official score of 10-1 and an unofficial score of 16-1; the girls were happy with how they played. The girls main goal is to make it to state again this year, in which the team must be in the top four in the state to participate, especially after recruiting enough players to have a full team of 14 players and an experienced coach. Coach Matthew McBrearty, last year’s water polo coach, continues to sponsor the team.

“We’re playing McNeil next Friday. They were the team we had to beat last year to go to state and that was when we didn’t have as many good players. We have a full team of good players this year so I don’t think it will be a hard win at all. If we win against McNeil then we win against Anderson, then we will be second,” Moran said.

The girls’ water polo team will play again against McNeil next Friday, April 13, and will participate in the Regional tournament April 20-21.