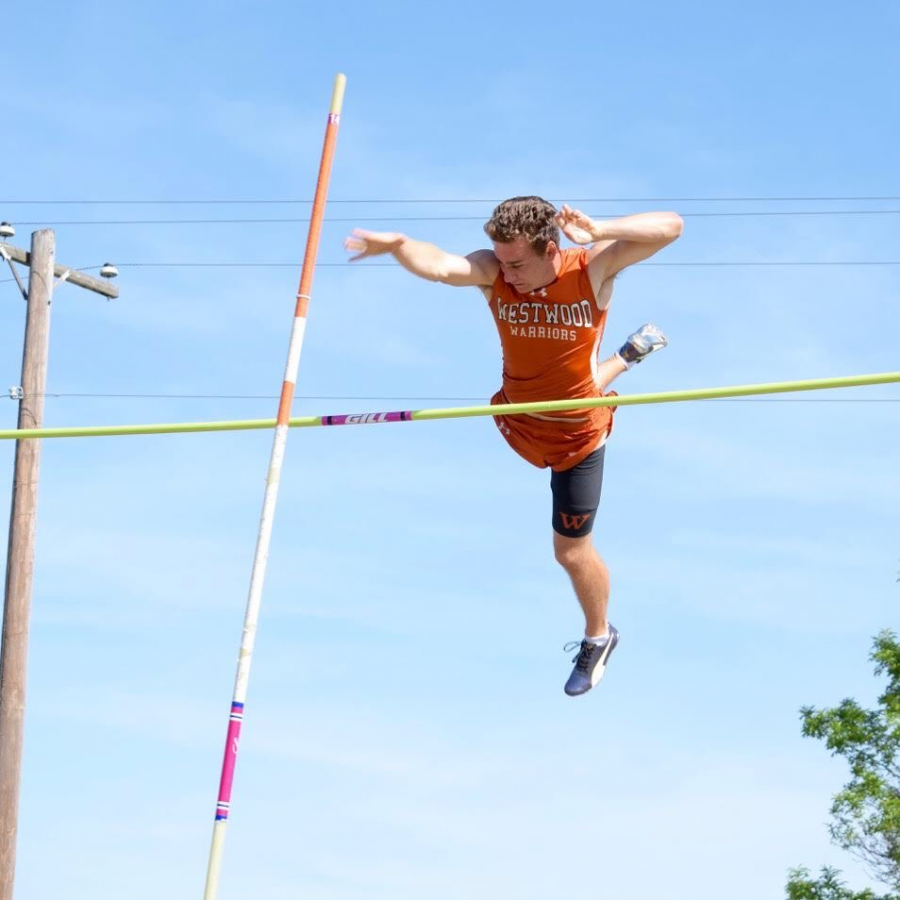 Finishing the season on a high note, the track and field team took home several medals and had nine varsity athletes qualify for the next round of competition at the District 13-6A Track and Field Championships on April 11-12. While individual athletes found success at the meet, the JV girls’ team also placed third overall against seven other schools.

The first day of the meet included all field events as well as running prelims. Lauren Ojeda ‘20 took fourth place in varsity girls’ discus with a throw of 110 feet 6 inches to qualify for area, as the top four athletes in each varsity event are able to advance. Abby Gregorcyzk ‘21 received gold in the JV girls’ division by throwing 87’01’’. JV girls’ shot put had Chloe Rech ‘21 and Jordan Pruitt ‘21 sweep first and second with 32’05.25’’ and 31’07.5’’. In boys’ shot put, Jaikem Murphy ‘18 qualified for area by finishing second and throwing 44’08.25’’.

Triple jumpers Shannon Lei ‘21 and Junna Castel ‘20 both received a bronze medal for their respective jumps in the freshman and JV division. Varsity high jumper Joseph Abreu ‘19 punched his ticket to area as well with a fourth place jump of 5 feet 8 inches. Freshmen Dana Mewhinney and Lauren Wood finished second and third in the same event by clearing 4’06’’ and 4’04’’.

“That was great; I was really happy that I got a medal. I didn’t expect it but I was really glad that it happened,” Wood said. “I was really worried that Coach Pugh would be disappointed if I didn’t do good. I hadn’t cleared anything good at all this year; it had been a long time since I had. I’ve definitely improved a lot since the start of the season because I used to not be able to clear anything.”

The pole vaulters found success in each division: varsity athletes Tristan Yates ‘18 and Emily Lu ‘19 both took silver and qualified for area with respective jumps of 11 feet 6 inches and 9’06’’. JV girls Junna Castel ‘20 and Veda Allen ‘19 placed first and second with jumps of 8’06’’ and 7’06’’. Connor Templeton ‘21 also received gold in the freshman division, setting a new personal record (PR) of 10’00”, while Shawn Hatcher ‘21 finished third and jumped 8’00’’.

The JV girls’ mile, which was only on the first day of competition, saw Megan Luu ‘21 place second with a time of 5 minutes 58 seconds.

Runners who placed among the top eight of their event were able to compete in finals on the second day. Dylan Frazier ‘18 qualified for area in the 110-meter hurdles with a fourth place finish of 15.43 seconds. Another hurdler, Allyah Beaty ‘18 similarly placed fourth to advance with a time of 47.39.

“The first four or five hurdles I wasn’t really jumping well; I wasn’t really in my groove, I was 6th or 7th. Once I got in it and focused more, I caught all the way up to 4th and beat another kid by .03 seconds to qualify for area,” Frazier said. “In finals we turned around so the wind was with us, and it was a new mindset because we were all going to PR.”

The longer sprinting and mid-distance runners received several top finishes to advance to the next round. Jenny Todd ‘19, the district champion from last year, qualified in the 800-meter run with a bronze-winning time of 2 minutes and 25.35 seconds. 400-meter runner Jacari Tate ‘19 ran 50.97 seconds and placed third to advance as well. JV runners Karim Cisse ‘19 and Meghan Booknis ‘20 also finished second and third in their respective divisions, running 53.78 and 59.07.

The JV girls’ 4×400-meter relay received silver for their time of 4 minutes and 23.44 seconds. The team of Gregorcyzk, Castel, KK Jenkins ‘20, and Booknis contributed 16 points to the JV girls’ overall third place finish at the meet.

The nine athletes advancing to the Area 13/14 Track and Field Championship will compete at Burger Stadium on Thursday, April 19 for the chance to qualify for the following regional meet. Complete results for the district meet can be found here.