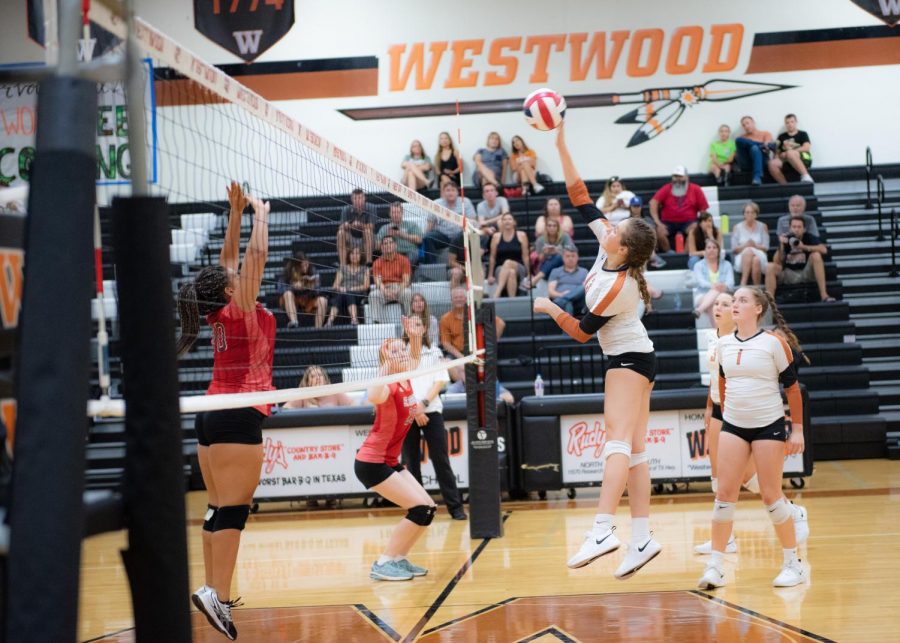 Alma Zirojevic '21 strikes the ball right before the win.

By Ishika Samant and Kathryn Markovitz

On Friday, Aug. 24, the JV White volleyball team took on the St. Stephen’s Spartans with a home crowd advantage, and won with a score of 2-0.

During the first set of the game, Lauren Kelley ‘21 aced six points in a row, and while she was serving for the team, they earned a total of 14 points. The girls played hard and won the set with a final score of 25-5.

“I think we did good, and we got a lot of good serves in,” Claire Gray ‘21 said. “But I think we need to improve on our passing for the next game.”

The beginning of the second set started off neck-to-neck, but the Lady Warriors were committed and pulled far ahead into the lead by 10 points. They continued to fight hard and ultimately were up the whole time, and won the last set with a final score of 25-6.

“I think we could improve on communication, and we need to learn to have a stronger mentality,” Emma Marsden ‘21 said. “Whenever we make mistakes playing a harder team, we freeze up, so I think the team needs to learn to just shake those mistakes off.”

“We did good considering the level of competition that we had,” Coach Lanea Meyer said. “It’s always hard to keep the girls focused, but they did alright overall.”

The Lady Warriors face off against the Round Rock Dragons on Aug. 28 at 5:30 p.m. at Round Rock High School.