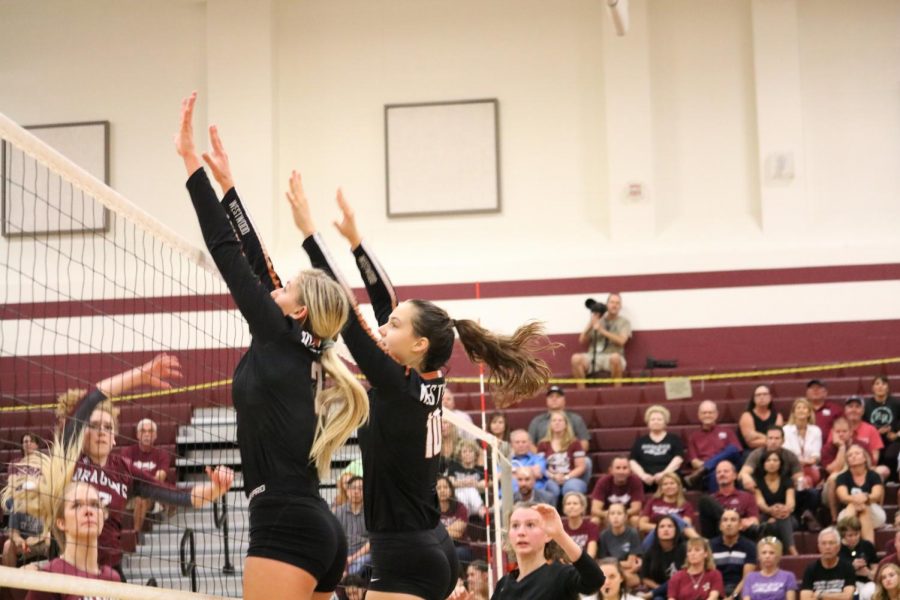 Audrey Quesnel ‘20 and Maggie Stout ‘19 block the ball from going over the net.

In one of the most anticipated games of the year, the varsity volleyball team defeated their rivals, the Round Rock Dragons, 3-2 on Aug. 28.

“We really had to come into tonight with the right mindset,” head coach Tara Nelson said. “That’s something that we have been really focusing on, like starting strong and not getting complacent from the beginning.”

The Warriors immediately displayed their dominance in the first set, with serves from libero Macy Prenger ‘19 putting the team on the board with a score of 3-0. Round Rock tried to retaliate, but a kill by Maggie Stout ‘19 quickly put an end to the Dragons’ scoring streak. The Dragons called a timeout after failing to keep the ball in bounds and came back with a vengeance, sending numerous spikes towards the Warriors only to have the ball returned with kills from Audrey Quesnel ‘20 and Maddi Kriz ‘19. A tip by Abby Gregorczyk ‘21 following a long rally between the teams earned Westwood another point, putting the score at 17-10. It continued to rise as Quesnel blocked the opponent’s spike, and proceeded to shut them down with a hit later on. The Warriors won the first set 25-15.

“We had good energy the entire time, and we didn’t back down,” Quesnel said. “We had scrappy defense, which really helped us a lot.”

In the second set, Round Rock seemed to find their footing, challenging the Warriors for every point from the start. A tip by Kenzie Beckham ‘21 tied up the score 2-2, followed by a spike by Kriz that put Westwood in the lead. Beckham sent six serves flying over the net to the dismay of the Lady Dragons, however this advantage was short lived as Round Rock had back-to-back serving streaks of their own, resulting in a point deficit of 14-19 for the Warriors. Quesnel quickly stepped up, ending the second streak with a swift kill to the center of the court. Ultimately, the Lady Dragons still came out on top, ending the set with a score of 25-18.

Jenny Todd ‘19 immediately put points on the board with the first serve of the third set, and Kriz showed her expertise with crucial digs that gave the Warriors a 5-4 lead. Stout dove to prevent a spike from hitting the ground, allowing the team to recover the ball and go on to win the point with another spike from Kriz. Round Rock managed to pull ahead 11-16 by tipping the ball just out of reach of the Warriors, yet Westwood continued to make big moves with a double block from Stout and Quesnel as well as a hit from Gregorczyk later in the game. A spike from Stout tied up the score 19-19, and successful plays by the rest of the team resulted in a score of 25-22 in favor of the Warriors.

The Dragons proved to be tough competition throughout the fourth set, keeping the score close at all times. Beckham executed a tip with ease, the ball floating right over the competition and falling just shy of their reach. A hit from Kriz sent the Dragons diving to the floor, only to have the ball fly off their hands towards the bleachers. Beckham helped Westwood advance their score even more with multiple serves that were left unreturned. Round Rock finally kicked into gear, bringing the score to 14-14 after a call from the referee in favor of the Warriors left them hungry for revenge. The Dragons called a timeout to gather their bearings, but could not gain the upper hand when a block by Kriz prevented an oncoming spike from reaching the Warrior’s turf. Quesnel continued to send hits over the net, finding holes in the Dragon’s lineup. Despite this, Round Rock pulled ahead 22-21 with a hard spike, and Westwood was unable to regain the lead, leaving with a score of 25-21.

Going into the fifth set, tensions were high as crowds of fans on both sides of the gym yelled chants back and forth in support of their respective teams. Serves by Prenger and Caroline Suter ‘19 gave the Warriors an early 5-4 lead, and Round Rock struggled to regain their previous momentum, sending several spikes both into the net and out of bounds. Beckham continued to serve consistently and a double block by Gregorczyk and Suter shut down the Dragons’ hopes of another point. Kriz nailed a serve that sent the Dragons’ libero diving to recover the ball, and Stout and Quesnel both put an end to Round Rock’s serves with their swift spikes. A serve from Suter and spike from Kriz ended the set with a win of 15-9 for the Warriors.

“This is one of the toughest games we play every year,” Coach Nelson said. “These are the games you look forward to. I knew coming in it was going to be a battle but this is definitely a huge confidence-builder for the girls.”

The Lady Warriors will battle the Stony Point Tigers on Friday, Aug. 31.