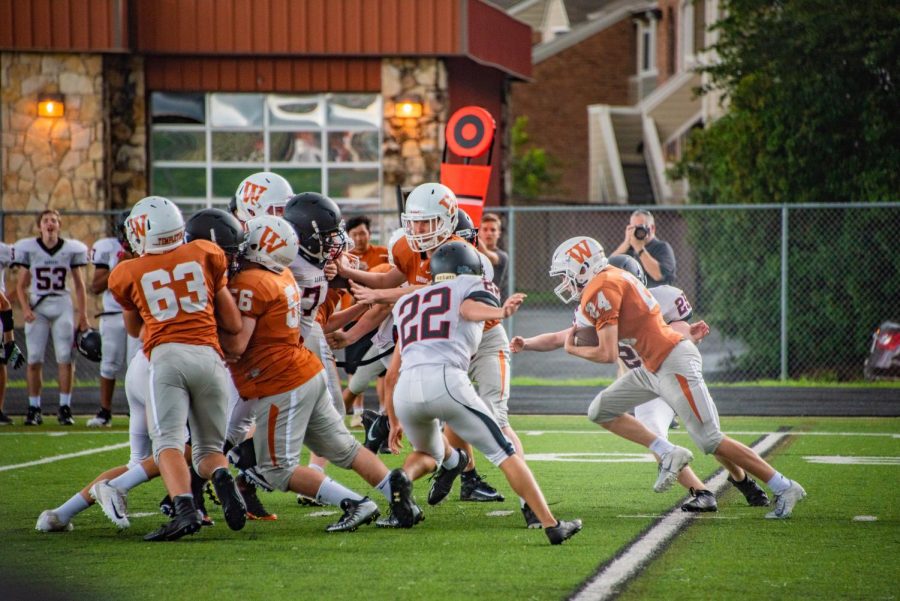 Running back Sawyer Harr '21 makes his way through the defensive line of the Vista Ridge Rangers.

On Thursday, Sept. 20, JV football took on the Vista Ridge Rangers in the pouring rain and lost 18-13.

“I held on pretty well to guys who were soaked,” Aaron Hanson ‘21 said. “I’m surprised they didn’t slip out of my grip.”

During the first two quarters the Warriors did their best, but were unable to score any points. The Rangers did not score any points either, so the two were stuck at a 0-0 tie.

“We’re doing good, the only issue is we need more effort from the team,” Cameron Rutherford ‘21 said. “Our team gives a lot of spirit, and we need some more today.”

Because of the rain, the Warrior Pride team went inside to the gym for their first performance of the year during halftime.

“I’m not that nervous because we’re really prepared,” Claudia Indriago ‘21 said. “ We’ve been practicing the routine for like two or three weeks now, so we have it down really good, and we felt really strong about it earlier today in practice.”

In the third quarter, the teams picked things up when Sawyer Harr ‘21 scored the first touchdown of the game. But the Rangers retaliated during their next possession and scored a touchdown bringing the score to 7-6, but still in the Warriors’ favor.

“Playing in the rain is difficult because you’re trying to worry about holding onto the ball, but you still have to play your game,” Miekaul Nash ‘21 said.

The Warriors will take on the Round Rock Dragons on Sept. 27.