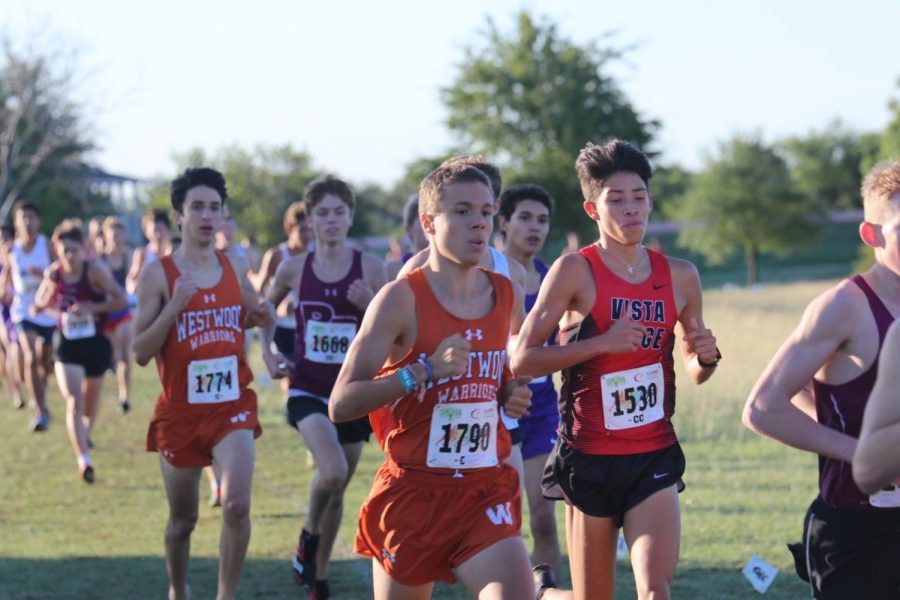 On Thursday, Oct. 11, the Cross Country team competed in their final meet of the season, the highly anticipated RRISD District meet. Held at Old Settlers Park, all nine schools from the 13-6A athletic district attended the meet which turned out to be one of the fastest on record.

“We’ve put in a lot of work this season, and this is our chance to show it,” Adam Tomsio ‘19 said. “We’re looking to advance to regionals, and I think we have a great chance. The guys have had one of their best seasons yet, and I don’t want it to end this soon.”

Anticipation and anxiety ran high before the races even began, as the boy’s varsity in particular had a rare opportunity to advance to regionals for the first time in decades, given their increased training and talent in the past year.

“I’m nervous, but pretty excited at the same time,” Pablo Lomeli ‘21 said. “Our bottom two runners need to step up today for us to advance, but I’m pretty confident that we can.”

Competition began with the varsity girls’ 5K, a race dominated by Vandegrift who swept the top four spots. The Warriors finished eighth out of the nine schools, but snagged a few PRs (Personal Records) despite their team’s showing. Rachel Iyer ‘22 was the first Warrior to finish, placing 31st with a season best and PR of 21 minutes and two seconds. Ella Moss ‘22 and KK Jenkins ‘20 followed soon after Iyer, both running in the 21 minute range.

The gun went off again, this time to signal the start of the varsity boys’ race, which seven Warriors competed in. Lomeli ran close to his season best in 15 minutes and 46 seconds, earning him fifth place and qualifying him for the regional meet. Nima Ashtari ‘20 placed 18th, with a time of 16 minutes and 45 seconds, about 45 seconds shy of his season PR. The other Warrior runners still managed to step up and pull their load, with a couple running their fastest times of the season. Zach Shrull ‘19 finished in 17 minutes and 15 seconds, netting him a season PR. Neil Panwalker ‘21 also raced his fastest mark of the season, in 17 minutes and 47 seconds.

Despite these improvements, the race ended in disappointment for the Warriors, who placed fifth and narrowly missed qualifying for the regional meet by eight points. Still, Thursday’s meet showcased a substantial improvement in the boys’ team. The squad finished poorly at the 2017 District race, placing second to last. This jump had some of the Warriors hopeful for next season.

“I think [the team] did an amazing job this season, even though it didn’t end well,” Coleman Hewett ‘19 said. “I can’t wait to see the great things they accomplish next season.”

Lomeli will be the sole runner competing at the Regional meet, which will be held in Arlington, TX on Monday, Oct. 22.