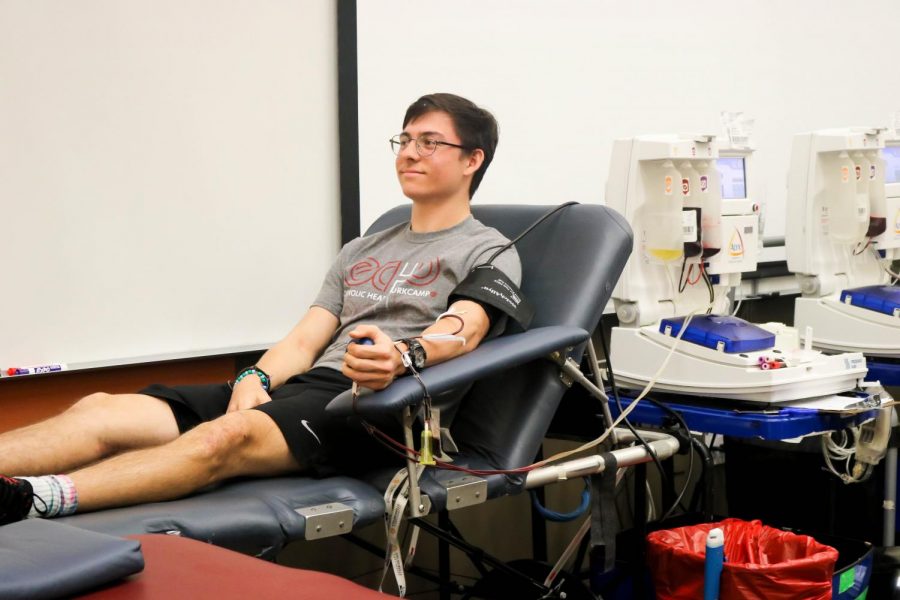 Jack Pitre '19 sits down as he donates blood.

On Monday, Oct. 29, students at Westwood were given the opportunity to participate in a campus-wide blood drive sponsored by the UNICEF club. Through the drive, students could donate up to a pint of their whole blood, or up to two pints of pure red blood cells to patients in need of blood around the state.

“I’m excited to donate because I’ve never done it before, and it’s a great habit to start at a young age,” Lily Swank ’19, president of UNICEF club, said. “It’s relatively easy, and [blood] is in dire need. I think it’s really important to give back in any way that we can, especially when it’s this convenient.”

The drive was made possible through We Are Blood, an organization based in central Texas that serves 10 counties and nearly 40 different medical facilities. Students 17 years of age that weighed at least 115 pounds were able to sign up in advance for time slots throughout the school day. Members of UNICEF club pulled these donors out of class and took them to the Great Room so that they could sign in and donate.

The whole process took about 45 minutes. Prospective donors were required to answer questions ranging from travel history to allergies while technicians performed a simple screening to determine the eligibility of the donor’s blood. Many students who were dehydrated or iron deficient were turned away at the end of the screening. Those whose blood passed inspection then went through the actual donation process. Afterwards, donors were required to rest for 10 minutes while they drank juice and ate complimentary snacks before heading back to class.

“I over-thought [donating blood] quite a bit,” Mia Kuge ‘20 said. “I hate needles a lot, so I thought it would hurt, but it was actually fine.”

Students had their blood drawn from We Are Blood’s certified phlebotomists who travel around the Austin area to host drives similar to this one. Like the students who donated, the technicians also understood the altruistic values of donating.

“Meeting new people and connecting with them is probably the best part about the job. I’m not exactly sure what keeps people coming back, but helping the community is definitely part of it,” a We Are Blood phlebotomist said.

Recent studies have also shown that donating blood can also have some health benefits, which may have been further motivation for some students.

“Donating thins your blood out, so some people speculate that it can actually help [the blood] circulate better and improve some [bodily] functions,” the phlebotomist said.

Regardless, the majority of the students who donated seemed to be motivated by the newness of the whole process, as most were first time donors, and by the satisfying feeling of giving back to those in need around central Texas.

“I definitely recommend donating, even for teenagers. Even if you hate needles or the sight of blood like I did, it’s such a rewarding feeling knowing that you’ve helped someone out,” Kuge said.

Although the blood drive won’t return to Westwood anytime in the foreseeable future, hopeful donors who missed out on Monday’s blood drive can still donate at mobile or brick-and-mortar locations all around Austin through We Are Blood’s website.