Students Volunteer at Race for the Cure 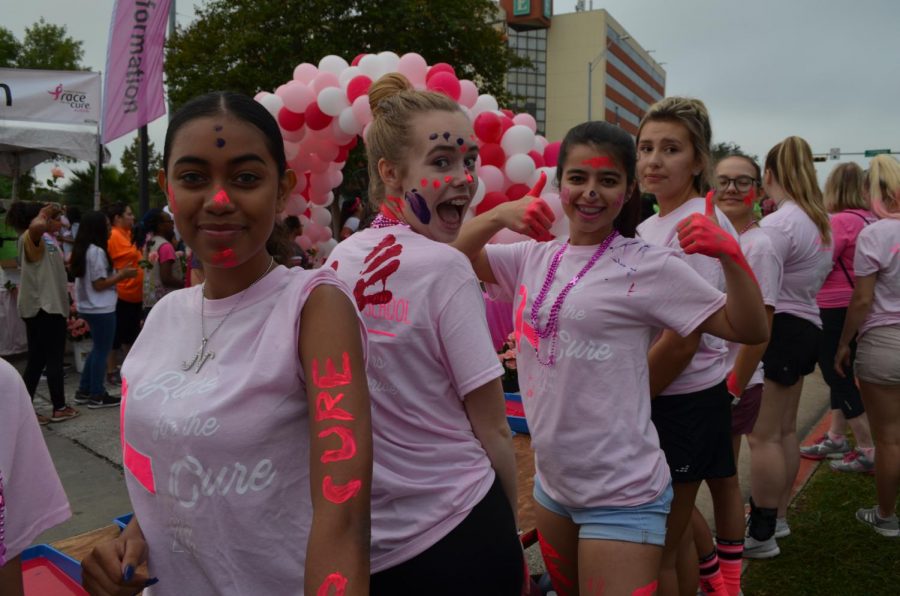 Warrior Pride members put pink and purple paint on their faces and arms in honor of breast cancer awareness.

The Susan G. Komen Race for the Cure, an annual 5K marathon, took place on Sunday, Sept. 30, in order to raise awareness for those with breast cancer. By participating and donating to the organization, community members can help fund breast cancer research.

The SunDancers, Warrior Pride, and cheerleaders continued the tradition of coming to the race to show their support for those who have struggled to overcome breast cancer. They cheered on the runners in the sidelines and helped them create their mark on a wall. At the end of the race, the wall was full of handprints.

“I got up around 5:30 a.m., and it was definitely worth getting to see the smiles on the survivors’ faces,” Aneesha Kambhampati ‘19 said. “It really makes you feel like you’re making a difference in someone’s life.”

The race began at 7:30 a.m. in the Austin American Statesman Lot and most runners finished around 9 a.m.. After they completed their run, various booths were open to give breakfast tacos, bandanas, lotions, and many other items promoting their brands. There was also a band which helped keep everyone’s spirit and energy up.

“I’m really proud to have participated in cheering on the survivors and runners,” Abri Rochte ‘20 said. “It’s really cool how so many people come together to support a cause and make a real difference in the world.”

As runners began to gather, many volunteers walked around asking for donations towards breast cancer research. The race raised a total of $268,927.66, which will be put towards furthering research, improving care, and raising awareness for breast cancer.

“I am really glad to hear that all that money is going in for research, and it’s unbelievable to think that this event will be able to make an impact in cancer research,” Divya Nair ‘19 said. “There are so many people each year that are affected by breast cancer, and having events such as this one will help raise awareness and money that [people with breast cancer] will benefit from.”

Breast cancer can affect people of every age and gender. As a result, a predicted 13 million breast cancer deaths will occur around the world in the coming 25 years. By taking action and raising awareness about the race and breast cancer, we can help further research and bring breast cancer to its end. If you want to make an impact and or learn more about breast cancer, visit Susan G. Komen Breast Cancer Foundation.