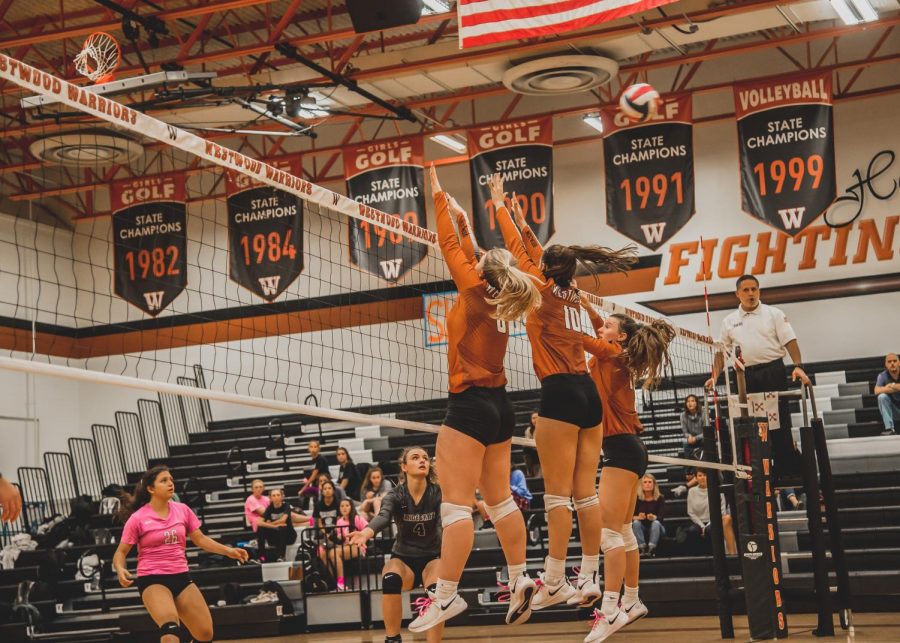 On Friday, Sept. 20 the varsity volleyball team entered their home court for their Homecoming game to battle the Vandegrift Vipers, who are ranked first in the district, in a three set showdown that the Warriors ultimately lost 3-0.

The Warriors began their district season with a lot of momentum, but have since suffered from key injuries. Outside hitter Maddi Kriz ‘19 injured her ankle earlier in district play, causing her to sit out several games. In their last match against Hendrickson, starting defensive specialist Macy Prenger ‘19 hurt her knee, and was forced to stay on the bench during the Homecoming game. Nevertheless, Kriz warmed up with the team on Friday, signaling her intentions to possibly start playing again.

The first set started with huge momentum for the Warriors, who grabbed the first few points and looked like the dominant team, pushing their lead to 14-8 at one point during the set. Kenzie Beckham ‘21 and Audrey Quesnel ‘20 worked especially well together at the net, with Quesnel earning several kills early on off of sets from Beckham. The back row also looked strong, as Jenny Todd ‘19, who replaced Prenger as defensive specialist, made key digs and passes to keep the Warriors from conceding points. The Vipers regrouped with their coach midway through the set, and regained some of their composure. The Warriors lost their lead through a couple of unforced serving errors and a succession of kills from Vandegrift’s outside hitter. In the end, the Warriors stumbled towards the end of the set, which ended 25-21 in Vandegrift’s favor.

“I feel like we could have anticipated the plays more and anticipated the balls more, because we did play very well, but we were like expecting our hitters to get a kill, or our blockers to get a block. We need to win against Vista [Ridge] to get to playoffs, so hopefully that’s gonna happen,” Prenger said.

The second set began with the Vipers taking the lead, but the Warriors never trailed far behind. Kriz came on the court sporadically during the second set to try and make a difference, but never stayed on the court for more than a couple of points, due to her injury. The Warriors still put up impressive stats, despite losing the set 28-26.

“You know honestly I think they played really well and they fought really hard. We were just looking at the statistics back there and honestly, we passed really well. We passed over a two, we hit over a two hundred. I think Vandergrift really earned their win here,” assistant coach Amber Hall said.

The Warriors came into the third set reinvigorated with the intention of taking the game into five sets to win. The set was a back and forth battle. Head coach Tara Nelson moved Kriz to defensive specialist for the whole set, a daring move to try and give the team an advantage in the back row. Caroline Suter ’19 and Zoe Menendez ‘20 shared several kills, with Maggie Stout ‘19 winning crucial jousts to keep the Warriors even with the Vipers. The score tied at 25-25 towards the end of the set, and neither team was able to pull ahead to win by two points. The Warriors were on the cusp of winning the set three times, but Vandegrift quickly responded to level the scoreboard again. Suter scored a point to keep the Vipers from winning 27-25, but the Warriors weren’t able to come out on top, and the set ended with Vandegrift winning 29-31.

“I think we played our hearts out today. There were a couple points here and there that we shouldn’t have missed. If we play like this against Vista Ridge on Tuesday, there is no way we won’t win,” Purvi Mujumdar ‘19 said.

The Warriors will play the Vista Ridge Rangers on Tuesday, Oct. 23 at 6:30 p.m. to try and secure their playoff berth.