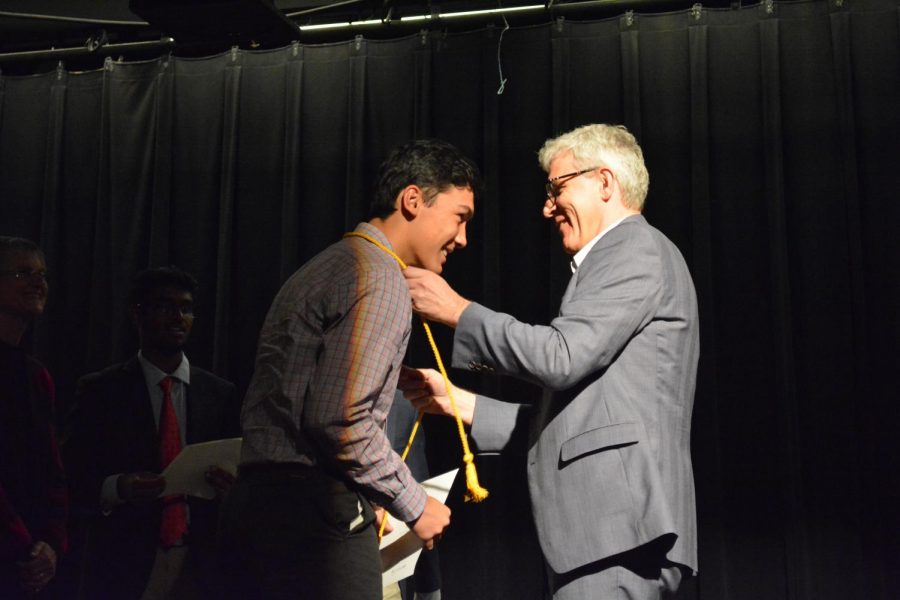 A father fixes his son's cord as he grabs his certificate.

The annual induction for National Honor Society (NHS) was held in the cafetorium on Saturday, Nov. 10 to welcome the society’s newest members.

As students walked into the school, NHS officers sat at a table with a sign-in for the parents and students, who were each handed a flyer with the inductees’ names. Members from orchestra played music while the inductees socialized and waited for the ceremony to begin. Everyone was arranged in alphabetical order with notecards placed on the chair of the inductee. Each inductee’s parent or friend walked them down the stage.

“Both of my parents and grandparents on my dad’s side came for my induction and they were all really proud,” Anna Bown ‘20 said.

After all were seated, the ceremony began with Pooja Enagala ‘19 singing the national anthem. Once all the officers introduced themselves and their positions, and speeches were given by Principal Mario Acosta, sponsor Mr. Bill Blaine, and Claire Tinker’s father. Afterwards, each of the officers recited the qualities it takes to be a member of NHS. For every quality, a candle would be lit.

“I decided to apply for NHS because it is such a great opportunity for me and I respect the people running it,” Melody Yin ‘20 said. “Overall, I am happy to be a part of an organization like NHS.”

Each row rose and approached the stage in order to receive their cords and certificates. As the inductee walked across the stage, their parent placed the cord around their neck. A quick picture was taken at the end of the stage of the inductee and their parent in order to mark their induction into NHS. The ceremony concluded with the inductees rising and holding their right hand up and pledging to be an honorary member of NHS.

“I think it’s a really great opportunity in general because I feel like you can meet more people and get more involved,” Anjali Suresh ‘20 said. “That involvement is really critical to not only your success in high school but also your success as a person.”