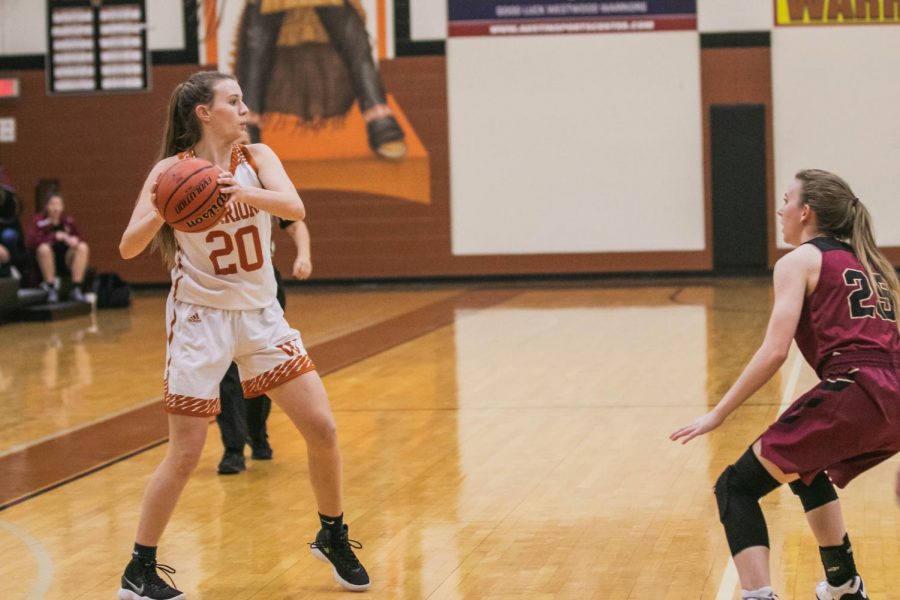 Surrounded by opponents, Kenzie Beckham '21 holds the ball ready to pass to another teammate.

The varsity girls basketball team played and won their fourth game of the season on Tuesday, Nov. 13 against the Rouse Raiders (2-3), which ended with a final score of 59-35. The win continues the Warriors’ undefeated march through season play.

The game began with a heated and fast paced first quarter, as the starting five began to dominate Rouse from the tip-off. Rouse was unable to produce much offensive momentum, but profited off of several early free throws. Kenzie Beckham ‘21, Danielle Davalos, ‘19, and Makayla Coy ‘19 were the top offensive contributors, and continued to rack up points on the Raiders’ side of the court with fast transition play starting on the Warriors’ half.

The Warriors also seemed to stick to their plan from the outset of the game, and managed to shut down Rouses’ main offensive threats.

“Going into the game, we knew [Rouse] drives, they put the ball on the floor a lot, and they have a couple of shooters that really stuck out so we were basically trying to run them off the line and then really focus on help-side defense,” Booknis said.

The matchup continued in a similar fashion, with the Warriors steadily increasing their lead each quarter by several points. The Rouse section began shouting some intimidating comments, but it didn’t seem to faze the players in the least. Although the Raiders outscored the Warriors 14-9 in the final quarter, it was far too late in the game for Rouse to grab the lead.

“Our second group to go in really didn’t have much energy, but by the second half I think it’s really awesome how this team supports each other and picks each other up. By the second half our entire team was having a lot of energy on the floor and it was really good,” Booknis said.

The Warriors will look to continue their season with another game at home next Tuesday, Nov. 20 against the Stony Point Tigers.