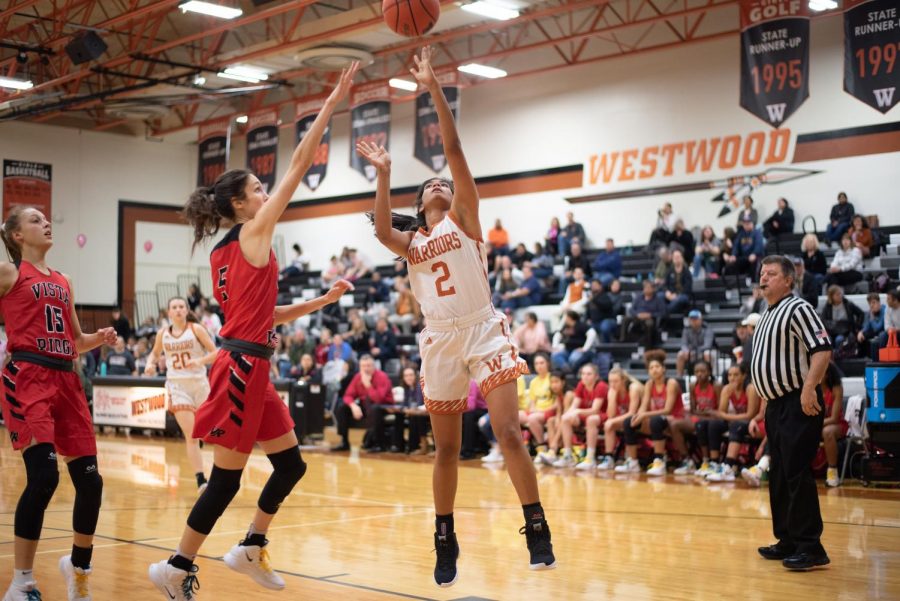 Spectators were treated to an entertaining contest on Friday, Dec. 7, as the varsity girls’ basketball team looked to defend their home court against the Vista Ridge Rangers, but the team fell in a tight match with a final score of 56-48. Makayla Coy ‘19 led the Warriors with 14 points and four rebounds, and Oni Boodoo ‘19 contributed 13 points and eight rebounds.

“I think Vista Ridge was a tough team to play, but there were many factors that played into the result of the game,” Anisha Chintala ‘21 said.

The Warriors got off to a hot start in the first few minutes of the game, opening up a sizable lead which increased to as much as seven. At the end of the first quarter, the score was 13-7 in favor of the Warriors, and Boodoo had already scored ten of her thirteen points.

However, in the second quarter, the Rangers would begin to battle back and close the Warriors’ lead. At the halftime buzzer, the Warriors’ advantage was cut to one point as both teams headed into the locker rooms, the score being 21-20 in favor of the Warriors.

To begin the second half, Vista Ridge went on an 8-2 run to seize control of the game, leading the Warriors to have to make adjustments to try and regain the upper hand. Both sides began to play more aggressively, and the Warriors were able to close the margin of deficit to two points as the third quarter ended with Vista Ridge on top 36-34.

Despite coming back, the Rangers began to pull away from the Warriors in the final quarter of the game, as the home team wasn’t able to make many shots due to Vista Ridge’s stifling defense. In the end, the score was 56-48 in favor of the Rangers.

“I think what we need to do now is focus on our next game against Round Rock and what we can do to win,” Chintala said.

The Warriors will travel to Round Rock High School to take on the Round Rock Dragons on Tuesday, Dec. 11.

*Westwood High School and the Westwood community would like to offer their support and prayers to the family of Vista Ridge basketball player Myles Hutcheson, who was tragically killed in a car accident earlier in the week.