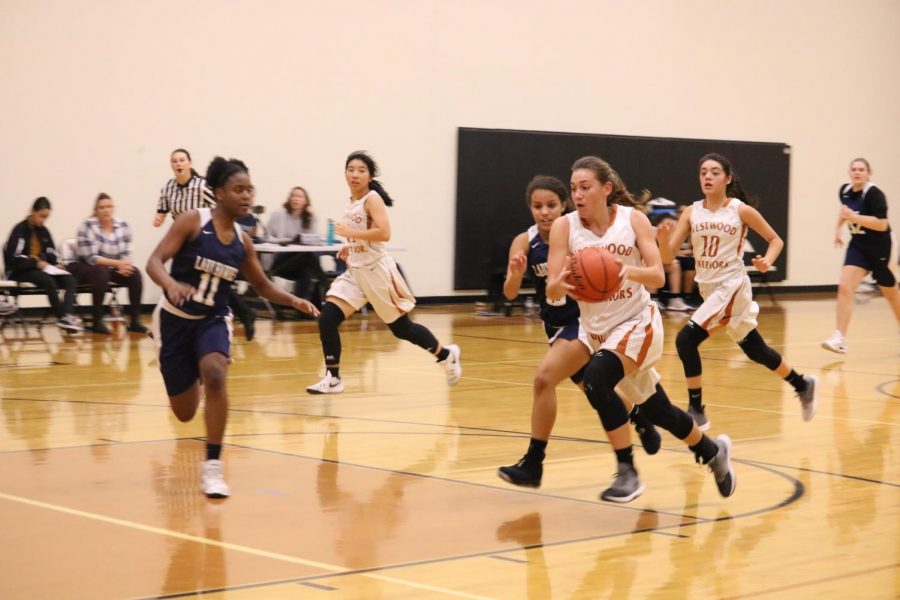 Gabbi Wallace '22 runs across the court while defending the ball.

The freshman girls’ basketball team was unable to defeat the Hendrickson Hawks on Tuesday, Jan. 15. They fought hard, but ultimately came short with a score of 58-41.

The first quarter began with the Warriors coming in strong with a three-point lead. Hendrickson retaliated quickly though, and was able to overtake the Warriors’ score. After multiple rebounds by Gabbi Wallace ‘22 and Kaylina Martinez ‘22, the Warriors were finally able to fight the Hawks’ lead, and a two-pointer from Wallace closed the gap 6-5. Hendrickson scored a couple more points, but the Warriors didn’t back down, with Wallace scoring another two-pointer, and Martinez and Emily Lott ‘22 getting multiple rebounds. Towards the end of the first quarter, the score was neck and neck, but the Hawks pulled forward with a two-pointer in the final seconds, ending the quarter 12-10.

“We could definitely communicate better,” Wallace said. “We weren’t calling each other’s names on passes and we weren’t communicating on defense.”

The Hawks began the second quarter with a two-pointer that emphasized their lead, but Wallace responded with a swift three-pointer, minimizing the gap to a one-point difference. Catherine Ray ‘22 and Martinez got a couple of rebounds, but the Hawks maintained good defense and stole the ball back. Lydia Harris ‘22 got fouled and made a free throw, and Wallace made a two-pointer soon after, evening out the score 16-16. The Warriors remained close behind the Hawks throughout the middle of the second quarter, with a couple of free throws made by Wallace and a two-pointer made by Elaine Ren ‘22. However, the Hawks surged forward in the last few minutes, ending the quarter 30-20.

“In general, we missed a lot of layups and free throws,” Wallace said. “That’s definitely something we need to work on.”

The Warriors began the second half with strong defense, but a couple of fouls lead to the Hawks scoring several free throws. They tried to recover with Ray making a two-pointer, but the team struggled to raise their score for the majority of the quarter. The Warriors missed many rebound opportunities, allowing Hendrickson to increase their advantage 35-22. Wallace finally broke the Hawks’ streak by making a layup, and Ray made a free throw and a layup as well. Harris also brought the Warriors ahead with a three-pointer, Martinez made a layup and got several rebounds, and Wallace had multiple rebounds and steals. Hendrickson didn’t let the Warriors catch up though, and closed out the third quarter 41-32.

“I think we could [be better at] keeping our cool,” Martinez said. “The other team was definitely nagging us, and if we kept our cool we probably could’ve done better.”

The Hawks pulled their lead forward by making a two-pointer and a three-pointer to begin the last quarter. Martinez and Wallace both got fouled on, and made a free throw each. Ren also scored a two-pointer despite the Hawks’ aggressive defense. The Warriors were unable to fight the Hawks’ strong offense though, and the Hawks secured their lead. Martinez made three free throws to close out the quarter, but it wasn’t enough to defeat the Hawks, and the final score was 58-41.

“I thought we played with a lot of composure,” Coach Scazzero. “There were a lot of negative obstacles thrown our way; we were down some players, we had a few injuries, [but] I think we fought hard anyway,”

The Warriors will take on the Round Rock Dragons on Tuesday, Jan. 22.