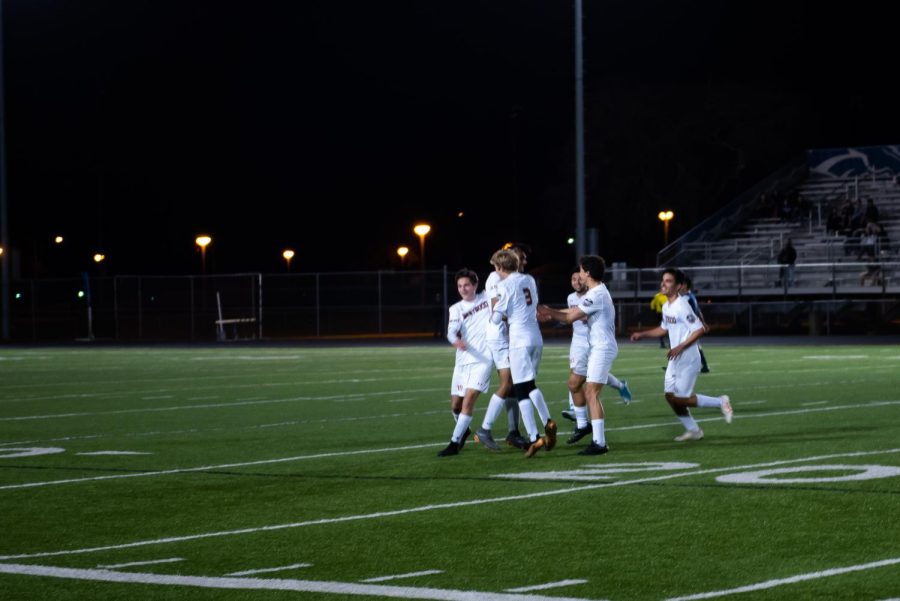 Azaan Moledina ‘19 celebrates with his teammates after scoring a goal.

The varsity boys’ soccer team traveled to McNeil High School on Friday, Jan. 25 to face off against a longtime district rival. The Warriors proved their dominance on both sides of the ball and came away with a decisive victory, putting a whopping five goals past the McNeil keeper. Once again, Theo Givens ‘20 proved his ability to decimate the opposing backline, adding two goals, while Felipe Centeno ‘19, Gilberto Romero ‘21, and Azaan Moledina ‘19 each added a goal of their own.

It was immediately apparent that the away team would control the pace of the game and kept the ball in McNeil’s half for nearly the entire first half. Givens and Niko Djordjevic ‘21 moved the ball especially well in the attacking third and nearly opened up the scoring in the fourth minute when a Djordjevic shot saw the McNeil keeper scramble to the ground to keep the score level. The duo finally found the back of the net for the first time in the 21st minute, when a through ball from Djordjevic fell to Givens, who fired off a well placed shot from 10 yards out. Meanwhile, Warrior keeper Justin Lang ‘20 remained well protected by his backline — a well-coordinated defense led by Sam Helwig ‘19 and Avi Kacker ‘19 staved off the Mav’s occasional attacking effort. After several more close yet failed attempts at the McNeil goal, the first half ended with a narrow 1-0 lead for the Warriors.

“Today was the best game when it comes to actual movement off the ball,” Head Coach Stefano Salerno said. “There were certain movements in the middle, which we always focus on, that came together tonight.”

In the second half, Givens opened up the scoring once again, this time from a free kick in the 9th minute. Djordjevic initially faked the kick, with Givens running up to take it himself at the last second, confusing McNeil’s defensive setup. From there, the Warriors began pulling away, starting as Centeno finished off a deflected Helwig free kick in the 15th minute. Barely five minutes later, Romero added the Warrior’s fourth goal with his head after yet another Djordjevic shot was tipped by the McNeil keeper.

“I would normally say that we played well tactically, but today I think that the spirit that we had really pulled us through,” Moledina said.

The away team finally rounded out the night when Moledina — who had been subbed on just a minute earlier — collected the ball close to midfield and slammed a devastating shot past the McNeil keeper from 25 yards out, sending the away fans and the Warrior bench into a frenzy.

“I went on instinct and took the shot and it turned out as a goal somehow,” Moledina said. “It was a truly beautiful moment. I knew I really wanted to score, and I knew the team could really use the goal.”

The game ended on a more bitter note when Captain Eduardo Rodriguez ‘19 clashed heads with a McNeil player in the waning seconds of the match, sending him to the ground and splitting his forehead clean open. However, with three district wins already under their belt, the Warriors still have much to look forward to as the season progresses.

“We have a bye on Tuesday, so we get four days to get better. It’s something that’s pretty impressive to start district on a 3-1 record, and we are currently in first place,” Coach Salerno said. “But again, it just shows you at the end of the game, [Rodriguez] getting hit, bleeding all over, and as he’s coming off the field he’s talking to his teammates making sure they stay in it ‘till the end.”

The Warriors will face the Vandegrift Vipers after their Tuesday bye on Friday, Feb. 1st at the Warrior Bowl.