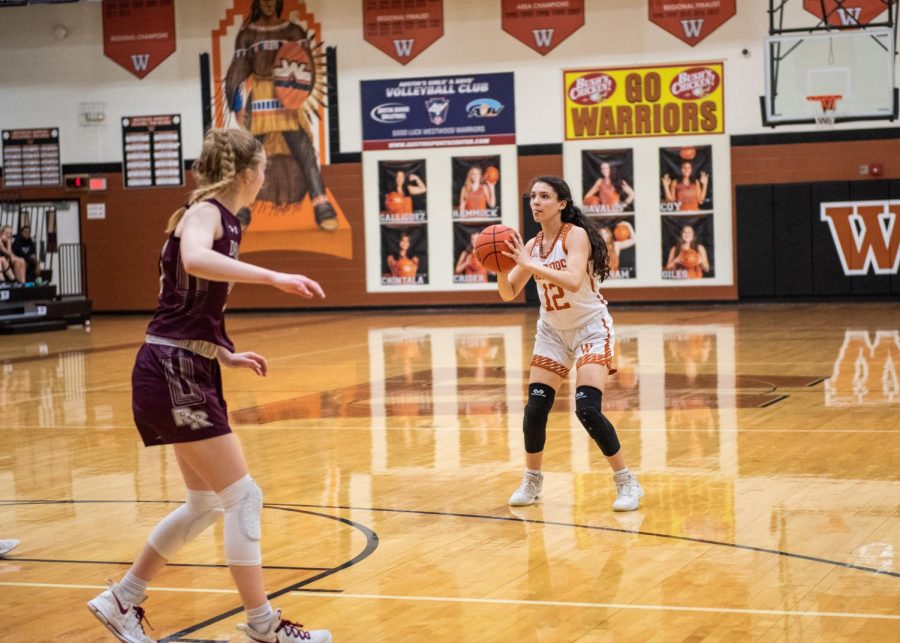 Desi Davalos '22 passes the ball to a teammate.

The varsity girls’ basketball team suffered a devastating defeat against the Round Rock Dragons on Tuesday, Jan. 22. This game was incredibly close, but the Warriors conceded in the end.

Right off the bat the Dragons took the lead, and their merciless defense kept the Warriors from catching up. Makayla Coy ‘19 and Oni Boodoo ‘19 scored a two-pointer and three-pointer respectively in an effort to surpass their opponents, but still fell short of the Dragon’s score. Another two-pointer from the Dragons pushed the Warriors further behind. Annalise Galliguez ‘20 scored a three-pointer, but this was followed up by a steal, a two-pointer, and a free throw from the Dragons. The first quarter concluded with a score of 10-9 in the Dragons’ favor.

As part of halftime, students from the Canyon Vista Middle School and Grisham Middle School basketball teams were invited to come onto the court and shoot baskets for a chance to win gift cards. Once this wrapped up, the third quarter began with the Dragons scoring a two-pointer. Kenzie Beckham ‘21 shot a free throw, and then later a two-pointer. The Dragons followed up with three two-pointers and a free throw, once again demonstrating that they weren’t willing to let the Warriors come close to beating them. During the middle of an offensive play by the Dragons, Davalos managed to steal the ball, resulting in a three-pointer from Boodoo. Another three-pointer from both teams wrapped up the quarter with a score of 34-33.

The fourth quarter started with multiple two-pointers from the Dragons, as well as another from Boodoo. Both sides scored free throws, and a foul on Davalos lead to a rebound and subsequent two-pointer from Coy that made the audience roar. Finally, the Warriors surpassed the Dragons’ score, and two free throws from Coy furthered their lead. A two-pointer from the Dragons placed them one mere point behind the Warriors. With very little time left on the clock and very strong defense from the Warriors, it seemed that the game was just about over. However, all hope of a Warrior victory was lost when the Dragons scored another two-pointer, now giving them a one point lead. The game was finished, and the score of 46-45 left the Warriors devastated.

“I gave my all throughout the entire game,” Galliguez said. “I wanted it to pay off, but it takes a team to win, not just one player.”

The Warriors will face the McNeil Mavericks away from home on Friday, Jan. 25.