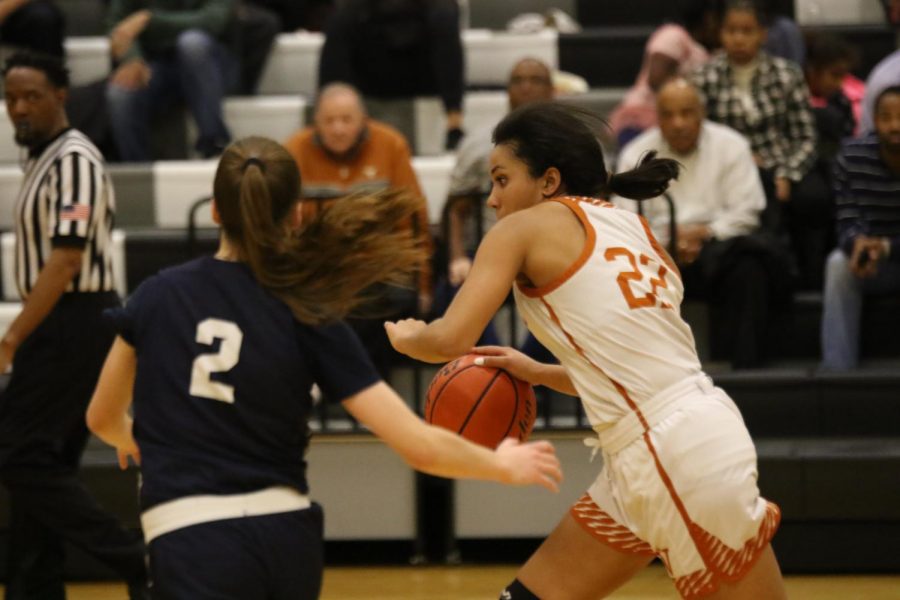 Makayla Coy '19 dribbles past an opponent in a game against Hendrickson on Jan. 16.

The varsity girls’ basketball team defeated the Vandegrift Vipers on Friday, Feb. 2. Despite emerging with a large point lead of 47-36, the game was a tough battle between the two teams.

With this game being key in determining who makes it to the playoffs, both teams were very on edge in the first quarter. Strong offense and defense from both sides kept the teams at similar scores, constantly tying with each other at every given opportunity. Danielle Davalos ‘19 made the first shot of the game, a three-pointer, but this was almost instantaneously followed by the same move by the Vipers. Oni Boodoo ‘19 made a two-pointer which was once again countered by Vandegrift, and both teams made one free throw during the quarter as well. This first quarter wrapped up with a score of 6-6.

The Vipers upped their intensity during the second quarter in an effort to surpass the Warriors and break the tying streak, establishing a quick three point lead near the start. Makayla Coy ‘19 came back at them with a two-pointer, but the Vipers retaliated with a countering two-pointer and a free throw. Some quick maneuvering from Boodoo allowed her to score two back-to-back two-pointers, and another one from Kooper Giles ‘20 put the Warriors in the lead. The Vipers stole the lead back with a three-pointer, but a free throw from Desi Davalos ‘22 tied the two teams up, officially ending the first half of the game with a score of 15-15.

The third quarter saw the balance between the two teams come to an end. Kenzie Beckham ‘21 scored a difficult three-pointer, and Boodoo followed with another two-pointer. Naturally, the Vipers made the exact same plays. It was here that the Warriors upped their game and went on a scoring frenzy, with Danielle scoring two two-pointers and Annalise Galliguez ‘20 making a three-pointer. Vandegrift tried to catch up with a two and three-pointer but still fell behind, ending the third quarter with a score of 27-25 in favor of the Warriors.

The Warriors kept up their lead at the beginning of the fourth quarter, with Coy making a free throw and Christie French ‘19 scoring a two-pointer. The Vipers attempted to tie the score again with a two-pointer, but the same shot was made by Boodoo right afterwards. A three-pointer from the Vipers pushed them closer to stealing the lead back, but a two-pointer from both French and Coy made sure that this didn’t happen. Again, the Vipers scored another three-pointer, but Boodoo and Coy both scored two-pointers, proving that the Warriors weren’t going down easily. French and Coy both made two free throws each, gaining a massive lead over their opponents who made only three free throws. With very little time left on the clock, the Warriors focused less on scoring and more on defense so the Vipers couldn’t catch up. All fouls came from the Vipers, which lead to a free throw each from Danielle and Boodoo. The Vipers were unable to score any more points, officially ending the game with a score of 47-36.

This was the last home game of the season for the Warriors, and this was particularly resonant to the seniors on the team and Coach Doug Davalos, with the game taking place on Senior Day.

“It’s Senior Day, and that’s always hard. I love these kids, and I know it’s not always easy to play for me because I’m demanding and I have high expectations,” Coach Doug Davalos said. “This Senior Day, I have my own daughter playing, so it makes it even more emotional. It’s nice to come out of there with a win.”

The Warriors will face off against the Leander Lions away from home on Tuesday, Feb. 5. This next game will determine who makes it to the playoffs.