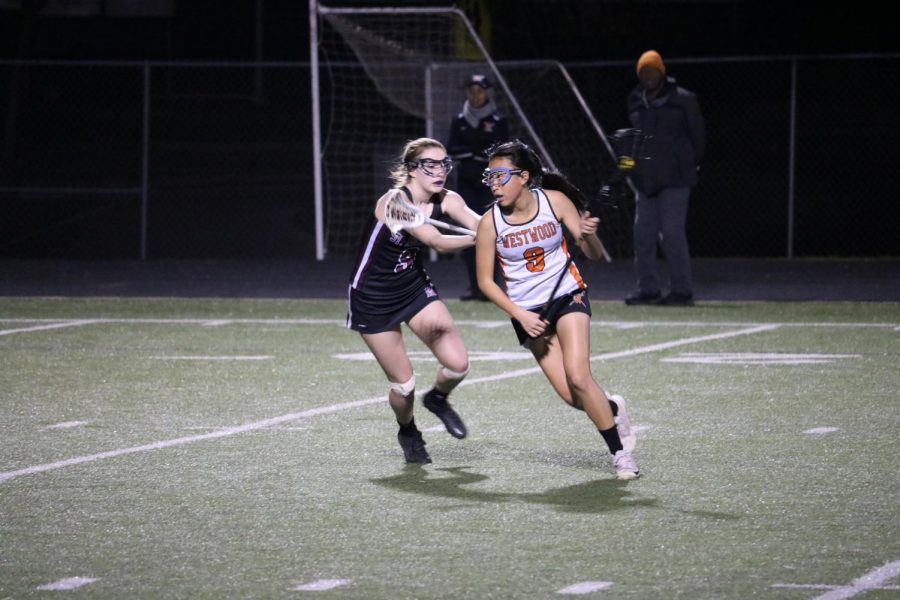 Joy Yang '22 fights against the opponent in an attempt to score a goal.

The JV girls’ lacrosse team faced the St. Michael’s Crusaders on Wednesday, March 6. After fighting through the wind and cold, the Lady Warriors’ came out on top, winning the game 6-4.

“We did really good this game because we really used teamwork skills and played as a unit,” Evan Shores ‘21 said. “We can just have more precise passes for next time.”

The first half began with strong offense by the Lady Warriors, with a turnover by Joy Yang ‘22 and an assist by JV captain Jillian Simmons ‘22 that led to a goal by Savannah Kipperman ‘21. The Crusaders immediately responded to this with a goal of their own, evening the score. Simmons didn’t let the Crusaders continue racking up points, and brought the Lady Warriors back up by scoring two goals. The Lady Warriors continued with their streak, and after Simmons won the draw, a pass to Yang led to another goal, ending the first quarter 4-2.

“We did a really good job of setting up our defense,” Simmons said. “We could have had better communication and made less errors.”

The Crusaders started off the second half by winning the draw and quickly scoring a goal after, but Yang didn’t let them catch up, and scored a goal as well. The Lady Warriors had strong defense for the rest of the half, but the Crusaders slipped through and scored another goal in a last attempt to get the lead. For the last two minutes, the Lady Warriors didn’t let the Crusaders go near their net to gain the lead, and Yang scored the last goal of the game, ending it 6-4.

“We had a few spots that we could work on, but overall we played really well as a team,” Yang said. “We could be back a little more on defense and just clean up our small mistakes. We did really well moving the ball down the field, looking for the open girl, and taking good shots on goal, though.”

The JV girls’ lacrosse team will face the Vandegrift Vipers on Friday, March 8.