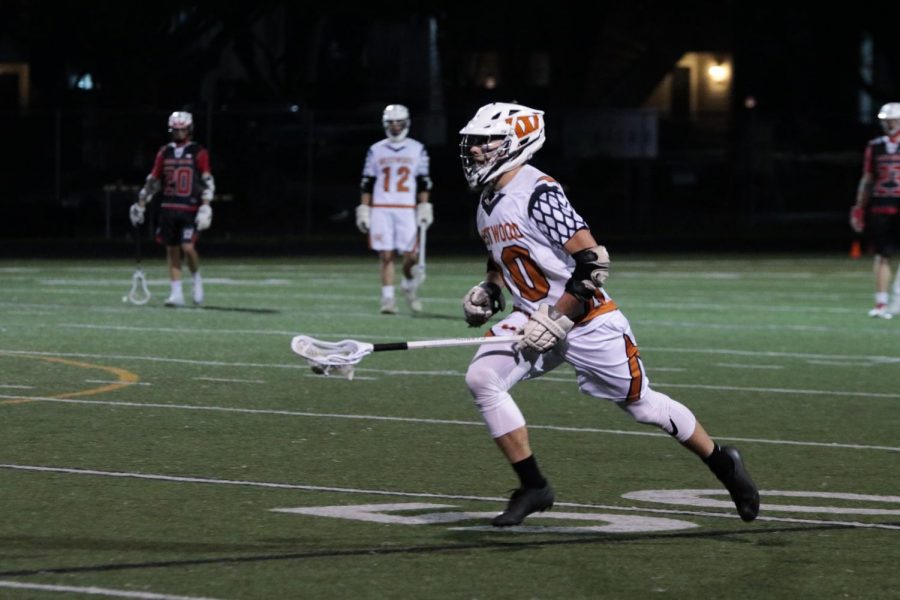 Ben Jensen '19 runs across the field with the ball.

The varsity boys’ lacrosse team took on the Vista Ridge Rangers in a fiery clash at the Warrior Bowl on Wednesday, March 27, with the Warriors prevailing against their opponents thanks to a strong second half of play. A dominant offensive performance was able to overwhelm the Rangers’ defense, leading to many opportunities to put the ball in the net. Combined with a good defensive performance led by goalkeeper Jacob Sanders ‘20, the Warriors were able to take control of the contest from the first faceoff.

“We played hard and our communication on-field helped us get a win after a tough couple games,” Adam Busfield ‘21 said.

Both teams had their fair share of scoring opportunities once the game got underway. Ultimately, after the first few scoring chances the Warriors had, Connor Cooper ‘20 was able to score the first goal of the evening, putting the home side in front, where they would stay for the rest of the contest. Over the next few minutes, the Warriors kept Vista Ridge on their heels, as the home side fired off shot after shot. Eventually, Brice Griffin ‘20 found the back of the net for what would be the last goal of the quarter, with the Warriors leading 2-0.

In the second period of action, the Warriors continued to apply offensive pressure, forcing Vista Ridge to call a timeout to try and regroup. Out of the timeout, the Rangers were able to capitalize on a scoring chance, cutting the lead in half as the score now was 2-1. With four minutes left in the second quarter, the Warriors were able to prevent the visitors from evening the score, which was a crucial stop. After that, the Warriors scored two goals in the span of just over a minute, with Cooper and Busfield notching the scores. At halftime, the Warriors led 4-1.

The second half was where the Warriors’ offense really started capitalizing more on scoring chances; however, the Rangers tacked on the first goal of the half, cutting the Warriors’ lead to two. From there, the Warriors put up three straight scores to end the quarter; Griffin and Busfield contributed these goals, with Busfield scoring twice in the period. Defensively, Sanders was able to make back-to-back stops to deny the Rangers once again. Heading into the final period of play, the Warriors’ lead was now increased to five, 7-2.

“The attacking intensity kept the ball on the offensive side of the field, creating an easier time for our defense and tiring out theirs,” Henry Baizer ‘21 said.

Just only two minutes into the fourth quarter, Duncan Alvarez ‘20 was able to score the first goal of the period, where the Warriors now quadrupled the visiting Rangers, 8-2. A few minutes later, Vista Ridge answered with a goal of their own. The Rangers weren’t able to produce many attacking opportunities from then on, with the Warriors developing some well-constructed attacks leading to three more goals. When it was all said and done, the Warriors won a lopsided contest 11-3.

“We are very pleased with the win but we know that we still need to pick up the pace and get better with every practice,” Baizer said.

The Warriors will face off against the Cedar Ridge Raiders in their next matchup on Saturday, March 30 at the Warrior Bowl.