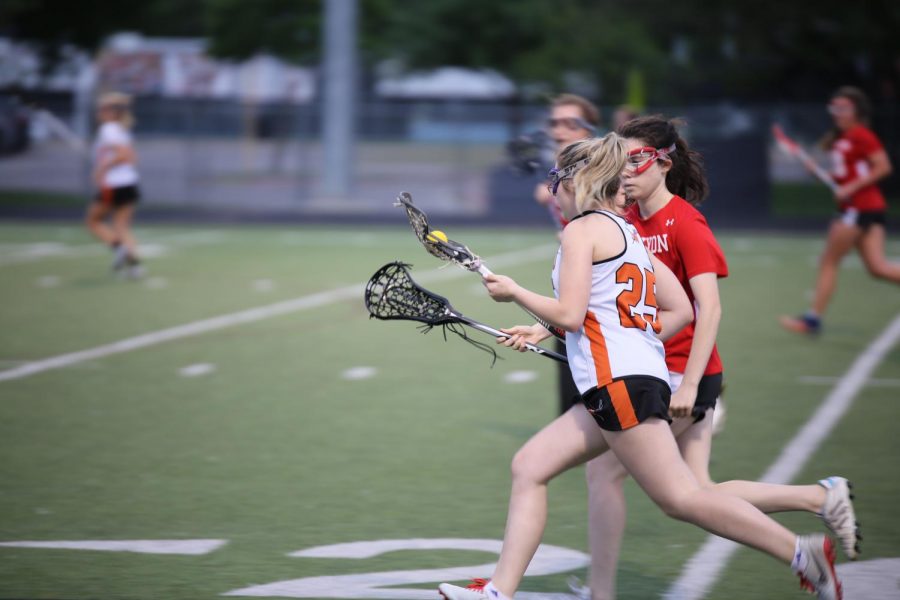 Megan Moravec '21 attempts to dodge the enemy defenders to score.

The JV girls’ lacrosse team faced off against the Canyon Cougars on Tuesday, April 16 at the Warrior Bowl in their final district game of the 2019 season. The Lady Warriors were able to establish a lead early on, and finished the game with a victory of 6-3.

The Lady Warriors quickly got on the scoreboard, with Evan Shores ‘21 scoring a goal in the first minutes of the game. After another goal from Shores and one from Bailey Trigg ‘20, the Lady Warriors dominated over the Cougars, 3-0. The Cougars then called for a time out and came back with a vengeance. Despite Joy Yang ‘22 gaining the draw control and a save by goalie Khia Elliot ‘21 followed by a clear to Riya Shah ‘20, the Cougars took possession of the ball and scored, putting them on the scoreboard 3-1. Unfazed, the Lady Warriors proceeded to score two more goals before ending the half, 5-2.

“Just being able to interact with people on the team on the field and just having that special time with them is so important to me,” Sophia Bombach ‘21 said. “I’m just so proud of the girls on my team and how hard they fought.”

The second half started slowly, with several shots from both sides and a long set which ultimately ended in a goal by Yang. In the last few minutes of the game, the Cougars gained possession of the ball yet again and scored the final goal of the game after a free position awarded due to a shooting space violation by the Lady Warriors. Despite several more attempted shots by the Cougars, the Lady Warriors ended on top, winning the game 6-3.

This game concludes the Lady Warriors’ season, and they will continue to train in the fall of 2019.