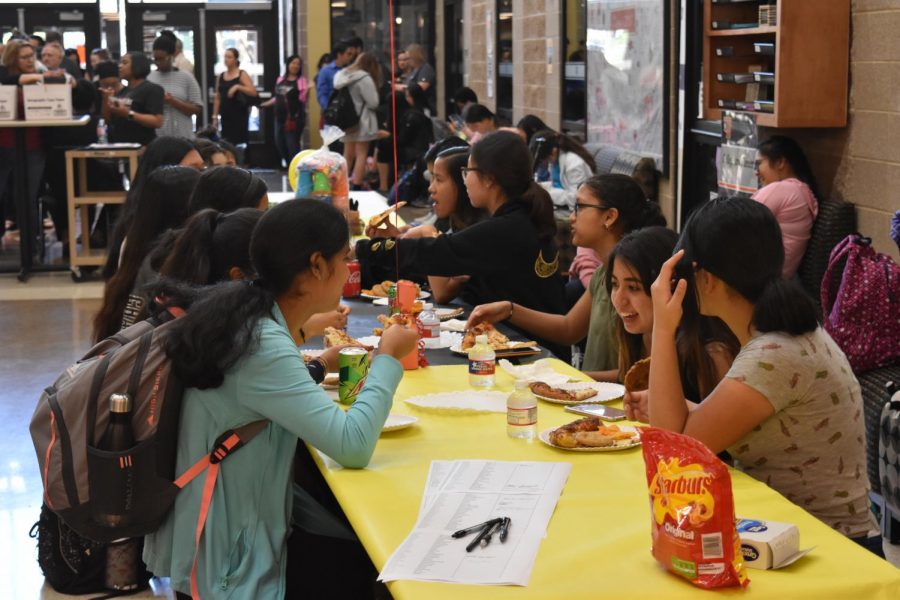 Students eat and chat with each other.

Colorful balloons and paper chains encircled the atrium as ambassadors began taking their seats for the annual Spring Social on Monday, May 13. Student ambassadors had the chance to win prizes by playing games, try line dancing with the Ballroom Dancing Club, eat pizza, and hang out with friends.

“The social turned out pretty much what I expected. Ms. Acker was there with me and Mr. Taylor, which was really awesome,” Academy Specialist Mrs. Lucy Sanchez said. “We just really smiled and were happy to see kids having a fun time in the middle of stressful testing season. I was happy with it. It was a little bit crowded because of the tickets [for prizes] and because of other things going on, but everybody was so cooperative and in the end, everything just worked out fine.”

Before the social began, the planning committee for the social called all the ambassadors to attention to explain the fun games which had been planned. At one end of the atrium, there was a relay race with starbursts, in which students would pick up a starburst with a spoon, carry the spoon in their mouths to the other side of the atrium, and drop it off in a plate. The team with the most starbursts in the other plate won raffle tickets for the prizes. Another game was held at the other side of the atrium, where students stood on one side of a table and threw ping pongs into the cups set up. If they made it into the cup, they would win a ticket.

“I think that the spring social went really well. Many people said that all of the games and colors and just the liveliness of the party was such a great break from all of the tests and it made them so happy,” Serena Manwani ‘22 said. “The only thing I would say that we could improve [for next year] is that we probably could’ve planned better in advance so that we had more games and so that we figured out how people won the prizes, but overall, it was really fun and pretty amazing to help plan and attend.”

Meanwhile, on the patio, the Ballroom Dancing Club was learning some line dances, including the Virginia Reel and the Shim Sham. Ambassadors were also invited to try out the energized dances with them. In addition, just outside of the patio, students played balloon volleyball with a paper chain hung up as the net. The winning team for the volleyball game, the ping pong game, and participants in the line dancing received raffle tickets.

“I loved dancing with the Ballroom Dancing Club. It was something I had never done before and I got to meet new people while relieving some school stress,” Sakshi Dhavalikar ‘21 said. “Ping pong was also super entertaining because there were prizes involved and everyone was eager to get as many as they could. I really enjoyed the social, in general, because it is a great way to connect with others in the program and have some fun. The games were super entertaining and the overall atmosphere was great.”

The atrium was decorated with vibrant balloons and paper tablecloths masked the tables set out for students to sit at. Food, including pizza, chips, cookies, water, and soda, was served at a table in the corner near the award show case. The party planners wrapped up the party by pulling raffle tickets at the end.The prizes were laid out on one table and as students got called, they picked their preferred prize.

“The social was super fun and destressing and it was nice to get to hang out with my ambassador friends one last time. The food was great, as always, you can never go wrong with pizza, and the prizes were pretty cool. I’d go again next year if I wasn’t a senior,” Tanya Chen ‘19 said. “I’m really happy with how much we’ve grown [as seniors] over the past year, and I’m really proud of all the newer ambassadors who stepped up to take on more leadership roles and responsibilities.”

The ambassadors wrapped up the year with this social and said goodbye to their seniors. The last ambassador event for this year is the Round Rock ISD (RRISD) Ambassador Training on Wednesday, May 29.