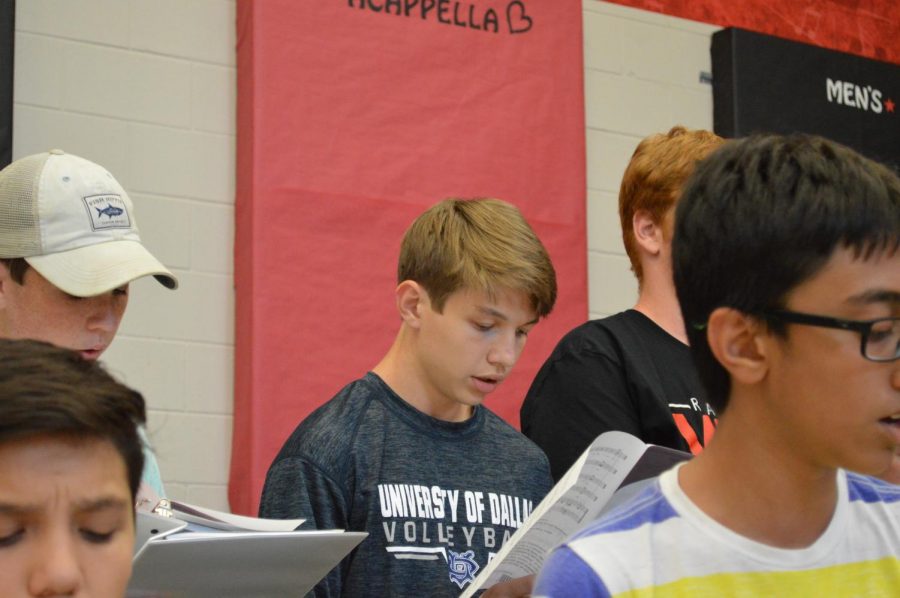 Niklas Stading '21 sings with the tenor and bass section in the combined rehearsal towards the end of the event.

Approximately 15,000 students participate in the TMEA auditions, which are comprised of four rounds. The top 220 students become members of the prestigious All-State Men’s Choir, All-State Women’s Choir, or the All-State Mixed Choir. Though no students from Westwood passed the final round in 2018, four succeeded in the year before.

The students had prepared a wide variety of songs for sectional rehearsals, such as The Composition of a Kiss. The spooky notes of the song’s intro were genuinely chilling as they echoed down the hallways. The numbers were not only in English, but also in Russian, French, and German, including the Russian song Bogoroditse Devo. Directors stopped the students in the middle of songs to critique them on on diction, emphasis, and rhythm. The students were also given time to share opinions about what was being conveyed within the lyrics.

“You add your own style to it with phrasing and emotion. Part  is just what the paper says,” Burns said. “And then you learn what the words mean. Then, you learn to evoke an emotion. You have to change the sound you put out with each word; you have to make it your own.”

The workshop ended with a combined rehearsal, in which all four sections gathered in the choir room to practice the songs together. The sopranos and altos sang Gloria, a song with particularly high notes, and was met with thunderous applause around the room. The final number performed was the gospel song Unclouded Day, which the students finished off with a loud, triumphant note. Amidst congratulations, the students were praised by the directors in regards to their shared passion for music.

“I don’t just enjoy singing but I also try really hard to be as musical as possible- especially at Westwood,” Myles Deol ‘20 said. “It’s a big deal to have excellence. For us, it’s like our lives and not just for fun.”

The first round of high school TMEA auditions will take place on Saturday, Sept. 15.