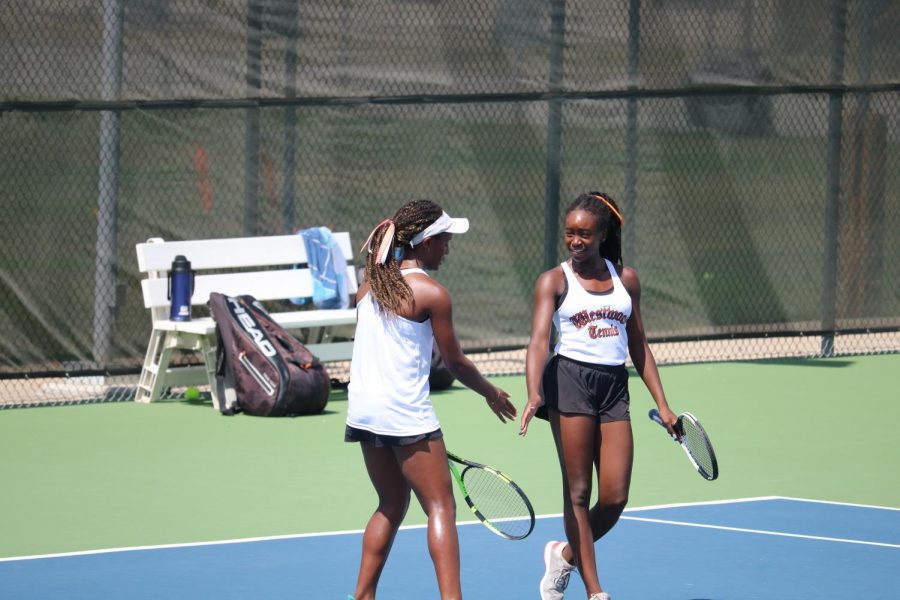 Kiana Graham '20 and Kinaa Graham '23 celebrate after winning the point.

On Thursday, Aug. 22, the varsity tennis team faced the Woodland Highlanders on their home court, with a huge overall victory of 12-7.

The game began with doubles matchplay as the Warriors emerged strong and gained an early lead. In line one, Gaurav Singh ‘20 and Daniel Antov ‘21 put up a good fight, ending with a 6-2 and 6-5 victory. Varun Somarouthu ‘20 and Anirudh Margam ‘21 found triumph 7-6 with a tie-breaker score of 7-3, ending with 6-4, after a previous loss against their Woodlands counterparts.

“It was very intense because we lost to them a week and a half ago, 4-15 in match play,” Somarouthu said. “It’s going a lot better, everyone got motivated from our last match, and I feel like everyone locked in.”

All eyes were on girls’ doubles matchplay as Kiana Graham ‘20 and Kinaa Graham ‘23 effortlessly beat their opponents in two 6-0 sets. The sisters’ partnership allowed for great communication on the court securing a clean victory.

“She sets up the point well with her deep balls, so I can go in and poach at the net,” Graham ‘20 said.

The Warriors found even more success following the girls and boys singles. Graham ‘20 graced the court easily, shutting down her opponent with an 8-1 win. In mixed doubles, Azra Pleuthner ‘21 and Sachchit Sivaram ‘21 emerged with a 6-1, 7-6 and 7-4 tie-breaker victory.

“We started off well in doubles. I definitely feel they’re coming back in singles,” Coach Travis Dalrymple said. “[Woodland] is a top 5 team in the state, and we’re just kind of testing it out and seeing where we stand.”

The team is looking ahead to the rest of their season, following the program’s first State Title win.

“We had a great season last year, and as much as we want to focus on it; We’ve got to turn the page. We’ve got some incredible freshman, and I’m excited to see how everyone is going to step up,”  Dalrymple said.

The Warriors take on the Westlake Chaps on Monday, Aug. 27.