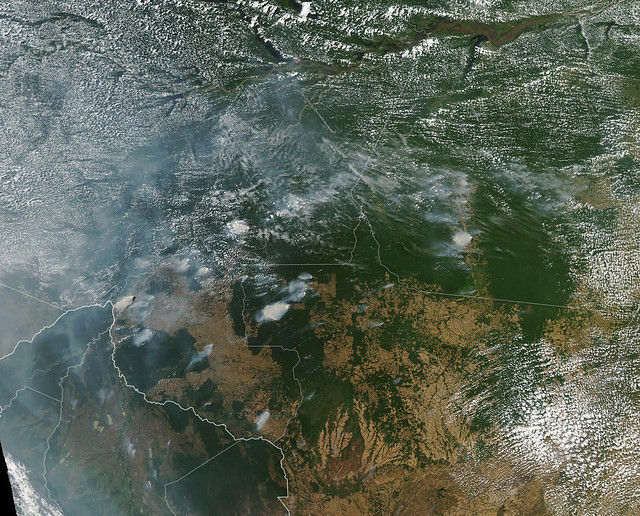 Smoke-smothered skies swallow the bright, sunny aura that had been beaming over the forest. The wind carries a melancholic whisper of all of the lives that have been claimed. The trees that could have been home to a family of monkeys, a nighttime campout for a sloth, or perhaps a lush environment for tiny critters to gather food, now lay as corpses. Once radiating with hums of thriving life and the peace of a stable ecosystem, the flames consuming the Amazon Rainforest have turned day into night.

The Amazon Rainforest, the largest rainforest in the world, has been on fire for the past month, causing irreversible damage to the environment. It is one of the most biodiverse areas in the world, is home to countless indigenous groups, and is vital to the world’s environmental balance. Each day that the fires continue to obliterate the forest, global warming further threatens the world. This is because the fires cause a large amount of carbon that the forest has absorbed over many decades to surge into the atmosphere very quickly. If the entire rainforest burns down, a climate catastrophe could potentially materialize due to the extreme and unnatural amount of released carbon and cause disaster. It should have been the number one priority for the Amazon region’s leaders to prevent the fires before they had even begun. However, the president of Brazil, Jair Bolsonaro, has not taken substantial measures to ensure that the fires are put out and that deforestation is restricted.

This year itself, there have been 72,843 fires in the Amazon (an 83 percent increase from 2018 to the present) according to Brazil’s National Institute for Space Research. After facing pressure from other countries, Bolsonaro has placed a 60-day ban on burning forest land and has appointed nearly 44,000 military troops to try and tame the ongoing fires. He stated that the military will “act strongly” to put out fires and that “[they] will act to combat deforestation and criminal activities that put people at risk in the Amazon.” However, the extent of the damage is already severe; already, 20 percent of the forest has been burned down, and what Bolsonaro has done so far may not be enough to guarantee that people will stop burning down the forest. Almost 4,000 more fires were started within 48 hours of the ban.

It is not evident who is responsible for the fires, but many scientists speculate that Bolsonaro’s lenient environmental policies played a large role. Ever since Bolsonaro became president in January, the number of fires has shot up. This could be caused by the fact that Bolsonaro’s administration has prioritized developing Brazil’s agriculture and mining industries over deforestation. Even though this is the dry season where wildfires can occur naturally in this region, it is becoming extremely common for farmers and cattle ranchers to set fire to parts of the dense Amazon Rainforest to clear the land for their farms. Bolsonaro has also accused environmentalists of starting the fires to protest his policies but did not provide any evidence supporting this claim. He was merely trying to avert the accusations made toward him and avoid taking responsibility for not discouraging deforestation in the Amazon when it was in its early stages. Bolsonaro fails to recognize the drastic negative impact of deforestation, not just on the Amazon region, but on the entire world.

Moreover, Bolsonaro’s intention of growing the economy instead of banning deforestation cannot be justified because the protection of the Amazon Rainforest is far more important to the future of the earth. Every living thing on this planet relies on the Amazon Rainforest because it functions as the “lungs of the planet.” Generating about 20 percent of the world’s oxygen and absorbing excess greenhouse gas emissions, it has been silently mitigating climate change while shielding us from it. If the whole Amazon Rainforest got burned down, climate change would spiral at an unimaginable rate. This would cause sea levels to rise, glaciers to melt, more extreme and frequent natural disasters, and the destruction of ecosystems. “The Amazon was buying you some time that it is not going to buy anymore,” Carlos Quesada, a scientist at Brazil’s National Institute for Amazonian Research, said.

The Amazon Fund is Brazil’s government-created program that nurtures projects related to preventing deforestation, environmental inspection, and the sustainable use of biodiversity in the Amazon Rainforest. Recently, Norway and Germany have decided to stop giving money for the Amazon Fund because Bolsonaro changed the structure of it and they likely believed that Brazil was not taking enough action to alleviate climate change, so there would be no point in giving funds to a country that wouldn’t use them for their intended purpose. “What Brazil has shown is that it no longer wants to stop deforestation,” Brazil’s Environment Minister’s Norwegian counterpart Ola Elvestuen expressed. Bolsonaro was angered at this and, in retaliation, criticized Norway of killing whales in the North Pole and Germany for allowing deforestation. He persisted by saying that Brazil would not take lessons from other countries. Furthermore, he rejected $20 million for the forest’s aid from the G7 countries: Canada, France, Germany, Italy, Japan, the United Kingdom, and the United States. Bolsonaro’s actions reveal that he does not care a lot about the environment. If he did, he would have accepted the funds from other countries, since preventing the fires from seizing the entire Amazon Rainforest is more essential than protecting his country’s reputation.

Other countries, such as Venezuela, are stepping in and offering their solidarity and funds. Social media is increasing awareness about the severity of the Amazon Rainforest fires, and hopefully, it continues so that the leaders of the affected countries, especially Bolsonaro, will be pressured to make environmental policies stricter and accept donations to put out the fires. World leaders of the Amazon Rainforest, who hold power in their hands, should not wait for something disastrous to happen before taking action to stop it. Bolsonaro should accept donations that countries offer to help restore the damage done by the fires. He should also instill new laws to ban deforestation and restrict the burning of any part of the forest, regardless of whether or not it is to cultivate the land for farming. These actions will help the Amazon Rainforest and improve the region’s reputation of caring about the environment. The future of the world depends on the health of this forest, and if we want to ensure that the world can sustain future generations, we have to care more about the environment right now. Climate change has already arrived, so we should not wait until it reaches a tipping point to take action — otherwise, life as we know it will vanish forever. The earth has given us so much, so the least we can do is give back to it.

If you would like to help save the Amazon Rainforest, here are some actions you can take:

Sign this petition to tell the Brazillian government to save the rainforest.
Donate to the Amazon Conservation Team.
Support the World Wide Fund for Nature, which protects species in the Amazon and around the world.
Use Ecosia.org, a search engine that plants a tree for every 45 searches.