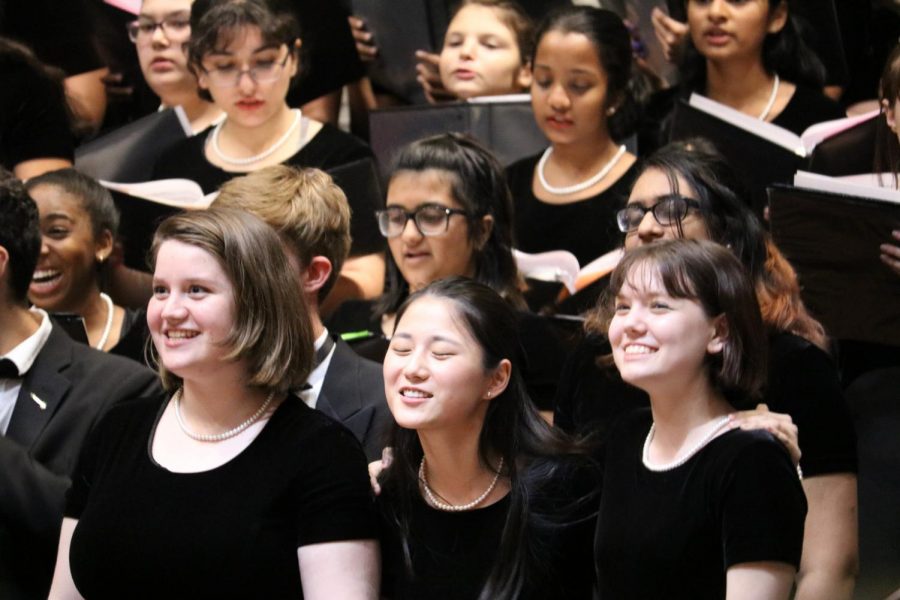 Seniors Grace Green, Anna Wicker, and Elizabeth Wolf dancing along to 'Baba Yetu'. Baba Yetu was performed by all the choirs. "[When we were learning it] we were so stiff and rigid that we didn't allow ourselves that freedom to dance and have fun," Green said. "The way it's written is joyful and happy, and it's amazing to be able to live through that,"

To welcome the arrival of autumn, Westwood Choir’s voices echoed at the Fall Concert on Tuesday, Sept. 24. It was their first choir concert of the school year, and was held in Hope Presbyterian Church. The golden-lit church was filled with family and friends of choir members from various sections.

“It’s always such an enjoyable time because we get to see members of the different choirs,” Keana Saberi ‘22 said. “It’s kind of like a bonding experience where we’re not separate choirs but we come together as one to blend as one unified group.”

The concert started with the Texas Music Educators Association (TMEA) auditionees singing Bogoroditse Devo, a deep, moving Russian piece. The members lined up against the walls or on either side of the church pews, surrounding the audience with their voices.

“I was conducting Bogoroditse Devo, and [watched the audience] have that experience of looking around and having the sound all around them,” Westwood’s Head Choir Director Andre Clark said. “And then also seeing those eyes look up like they were a part of the group; they were immersed in the experience as opposed to just being sung to or sung at. I’ve had more comments from parents and family about how that moves them more so than those things that we already knew about.”

The Concert Women then performed Elegy and Letter From a Girl To The World. The latter was accompanied by percussion such as drums and maracas, emphasizing the challenging, proud tone of the song. The Concert Men followed them with Lady, to the Flowers Go and Sansa Kroma, an exciting piece that included the singers clapping over their heads in intervals. Sansa Kroma was led by Gabriel Paredes ‘23, and was the number met with the most enthusiastic applause from the audience.

Chorale followed by singing Amor Vittorioso, a short and swift Italian piece, as well as Away from the Roll of the Sea. Varsity Women performed the soothing My Lord has Come, another TMEA audition piece, in addition to You are My Song. You are My Song is a slow and emotional number by Vandegrift Head Choir Director Michael Zook.

“My favorite song to perform was You are My Song because it was written by a Choir Director who works at Vandegrift, “ Rosie Deal ‘22 said. “And that was really cool because his husband came and we got to perform for them. It’s a really meaningful song to a lot of different people.”

Chamber sang three songs, including The Lake Isle, which was accompanied by a guitar and a string quartet. After their performance, there was a brief pause in which Mr. Clark and Assistant Choir Director Robin Harwell were presented with gifts such as cake and posters by the choir’s senior officers. Ms. Harwell recently became a Westwood staff member, and many officers expressed their gratitude to her.

To end the concert, all choirs stood on stage to perform Baba Yetu, a Grammy-winning Swahili song which has the unique background of being from a video game, Civilization IV. The song was led by Violet Burns ‘21 and Helen Huang ‘21, cheerful and invigorating compared to the more solemn selections performed. The final piece sung was The Lord Bless You and Keep You, a unifying, religious piece in which all choir members sang while interlocking arms and smiling.

“Something I love is the traditions that we do like singing The Lord Bless You and Keep You,” Saberi said. “That’s something that’s been passed down even before Mr. Clark joined the Westwood family, so it’s always been integral for us.”

The concert ended with much applause, and the choir gathered to take pictures with their loved ones. Numerous members will be advancing to the second round of TMEA auditions at Stony Point High School on Monday, Oct. 7.