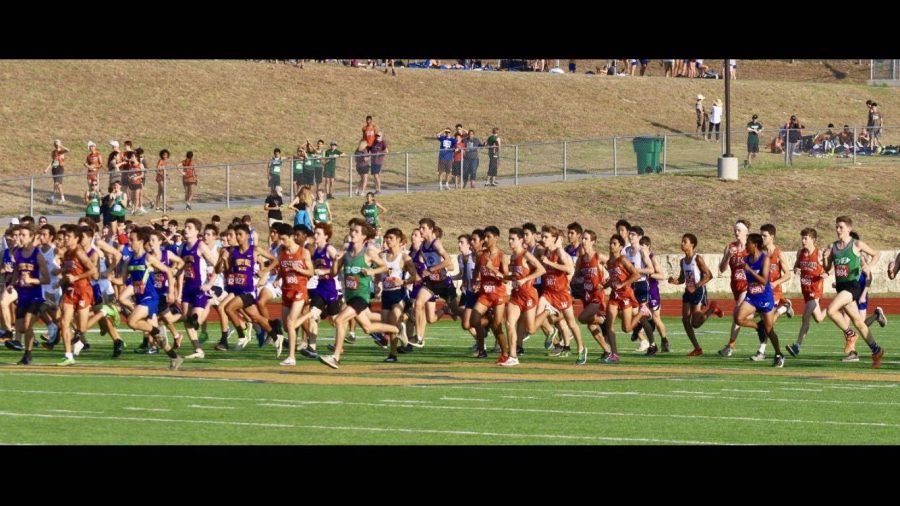 The varsity boys begin the race on the football field. The large clump soon narrowed to a lead pack of ten runners. Photo courtesy of Ramesh Swaminathan.

The cross country team braved the hilly terrain of Lago Vista on Friday, Sept. 13 in a meet attended by 34 schools from the central Texas area. The varsity boys placed third with 90 points after being outrun by district rival Round Rock (36 points) and regional foe Liberty Hill (69 points). The varsity girls finished fourth, bolstered by an impressive fourth place finish from newcomer Priya Gangadharan ‘23 and a top-ten placement from Sam Newlin ‘22.

“The course, being quite rocky, slowed us down a bit but everyone pushed through and placed well,” Newlin said. “I’ve enjoyed watching the girls improve together so far this season.”

Similarly, the boys were slowed by the course’s strenuous nature, which included an opening lap around the Lago Vista track followed by two loops around a trail of prolonged uphill running before a rocky and hazardous descent.

“The course was harsh, to say the least, and I feel like we could have prepared for the hills way better during training,” Pablo Lomeli ‘21 said.

Lomeli finished fourth in a stacked field after being beaten to the line by two Round Rock runners, but the team boarded the bus home feeling optimistic about the overall results.

“This meet wasn’t that important, what we can take away from it, though, is that as of now we’re well on track to qualify for region later this season,” Lomeli said.

In short, the Lago Vista invitational was a token opportunity for the Warriors to build the mental resilience needed to close out the season. After missing a regional qualifying berth by a mere nine points last season, the squad hopes to not have to repeat the sad history of last year’s defeat this October.

“Although our times this week were relatively slow, we were mentally strong and we didn’t give up,” Neil Panwalker ‘21 said. I really believe this mental toughness is going to help us in the upcoming weeks when we face our toughest tests.”

The Warriors face their next test at the Giddings Invitational held at Camp Tejas on Friday, September 20.