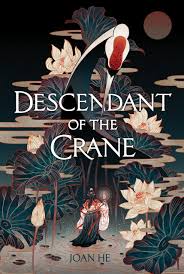 Descendant of the Crane is written by Chinese-American author Joan He, who lives in Philadelphia. Photo Courtesy of Joan He.

What do you do if you are pressured to protect the innocent, but in doing so you become the guilty? This is the dilemma new queen Hesina faces in Descendant of the Crane by Joan He, a political fantasy novel based on Ancient Chinese kingdoms.

I discovered this book after a long search for Asian fantasy novels, a still-developing genre of fiction. The beautifully illustrated cover immediately caught my eye, with an interesting image of a crane and a patch of lotus flowers looming over a girl in traditional Chinese clothes. The East Asian style of lineart is highly appealing, and the grave, suspenseful atmosphere of the illustration was what first intrigued me. True to the ominous color scheme of dark green and red, the story itself proved to be dark and contemplative.

The plot revolves around Hesina, and her struggle to lead her kingdom and investigate her father’s death. Whilst uncovering the secrets her father left behind, she also becomes conflicted because of her desire to defend soothsayers, the pariahs of her society. As her resolution to solve her father’s murder and her developing sympathy towards the soothsayers start to intertwine, Hesina finds her relationship with her remaining family being both tested and strengthened.

This main mystery kept me on my toes throughout the entire book; Hesina’s pensiveness seeped into my own heart as each page was turned. The harsh treatment the soothsayers face mirrors the hatred that many minority groups face in society today, adding to the anxiety and suspense. I shared Hesina’s frustration over her inability to help her own citizens, fearful of provoking the ire of the majority. The horrifying descriptions of persecution and punishment are all too familiar, and Hesina spends much time debating over issues that have yet to be solved in our society.

On the other hand, the excess of predictable plot twists was one aspect of the book that I didn’t particularly enjoy. Distracting me from the main issue, these twists made the book confusing towards the end. Nevertheless, Hesina is a splendid protagonist. She is somewhat of an advocate for the reader, thinking and acting with a more modern mindset than the characters surrounding her. Like many other fictional characters of royal blood, she is thrust into undesired power,  but I liked the fact that she readily faces her issues rather than falling behind in her duties as a queen. Her desperateness feels very real, and dragged me into feeling both triumphant and devastated along with her as she uncovers secret after secret. Her turbulent but heartwarming relationships with her four very different siblings resonated with me as well, as a sister myself. For me, Hesina’s emotional complexity and unique thought process were what made the story so gripping.

Through Hesina’s journey, He touches upon prejudice and the devastating effects of political corruption, while also stressing the importance of family. I highly recommend this book to anyone who wants a story to truly sink their teeth into; Descendant of the Crane is a puzzling, culturally rich debut novel that will strike deep into the hearts of mystery-lovers and historical drama fans alike.