JV Football Takes On Round Rock In Split Games 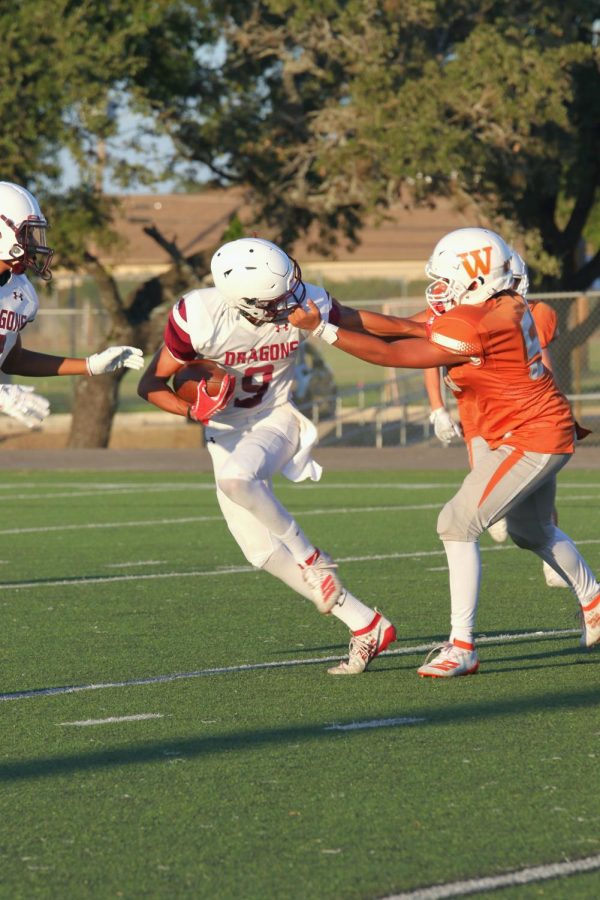 Once he's got a grip, Dylan Morales' 21 is unstoppable. Morales successfully stops opposition from running the ball and getting an advantage.

On Sept. 26th, the JV teams went up against the Round Rock Dragons with the white team losing 21-6 and the orange team winning 21-18.

The white team took the field for the first game. Within the first 5 minutes of the game, both the Warriors and Dragons held a strong defense. Wide receiver Spencer Miller ‘22 gained a fair amount of yardage while running backs Myles Haney ‘22 and Marcus Clinton ‘22 carried the ball further down the field. Switching to defense, defensive line Haiyang Pang ‘22, linebacker Dylan Jansky ‘22, and Clinton knocked down multiple opponents to prevent the other team from scoring.

“We just need to get things done whenever we need to,” Miller said. “I think we played with passion, and whenever we played as a group, we executed.”

Transitioning back to the offense at the start of the second quarter, the Warriors were unable to score any points. At the beginning of the second quarter, the Dragons took the field. Jansky and Osmar Martinez-Benitez ‘22 blocked most of the opponents with scoring potential. Defensive back Damon Dawson ‘22 and LB William Waghorne ‘22 chased down other ball carriers out of bounds. The Dragons later scored the first touchdown of the game along with a field goal. Clinton, Haney, and Miller helped move the ball further down the field while WR Demar Flemings ‘21 scored a touchdown from a pass. Jansky and WR Lee Richards ‘22 blocked many opponents. Later in the game, the Dragons scored their second touchdown and a field goal scored in the last 10 seconds, ending the second quarter with a score of 14-6.

“We need to work on communicating and working better as a team,” Defensive line Noah Eisenberg ‘22 said. “I feel like we could work on the plays better and get the momentum going.”

[We need to work on] intensity and motivation on the field,” Clinton said. “[Next time, we need to] execute offensively and make those tackles on defense.”

The second game of the night the orange team played the field. Within the first minute of the game, Quarterback Mathew Lescano ‘22 passed the ball scoring the first touchdown. While the Dragons played offense, LB Dylan Morales ‘21 tackled his opponents. LB Anthony Jarmon ‘21 and DB Eric Uffelman ‘21 chased the other player’s ball carriers out of bounds on multiple occasions. The Dragons failed to score any points leaving the Warriors in the lead with the score of 6-0.

“We had our mistakes, but in the end, we fought through the whole game,” Lescano said. “It means the world to come out on top. We need to work on putting more drives together consistently as we did versus Austin and defensively we just need to be more consistent.”

“I think that at times only certain parts of the field of the players are in the game and the other part are not focused,” OL Diego Rodgriguez ‘22 said. “What we really need to work on the most is making sure everyone is on the same page every time so that we can all just execute perfectly. I think we had really good effort and we kept the energy up and it was a lot of fun.”

During the third quarter, WR Cody Nasrallah ‘22 carried the ball further down the field, but the Warriors still couldn’t gain a touchdown. After switching back to defense, the Dragons scored another touchdown leaving the warriors seven points ahead with 13-6.

“I think that after we were down, we realized we needed to get our attitude more up,” DB Javen Barrientes ‘22 said. “Honestly, I think we just need to work on our effort on most plays.”

Shortly after the Dragons scored another touchdown at the end of the third quarter. Within the last quarter, DL Sam Doris ‘21 gained an interception, which led to the Warriors scoring the last touchdown of the game, along with a two-point conversion. The game ended with the Warriors achieving a victory of 21-18.

“They gave incredible effort all night long,” coach Paul Thailing said. “We believed in each other and finished the game and I’m super proud of them. We need to believe that we can beat anybody on any given night and that we’re a good football team and that we just gotta keep practicing hard getting better every day. These outcomes will go our way more often.”