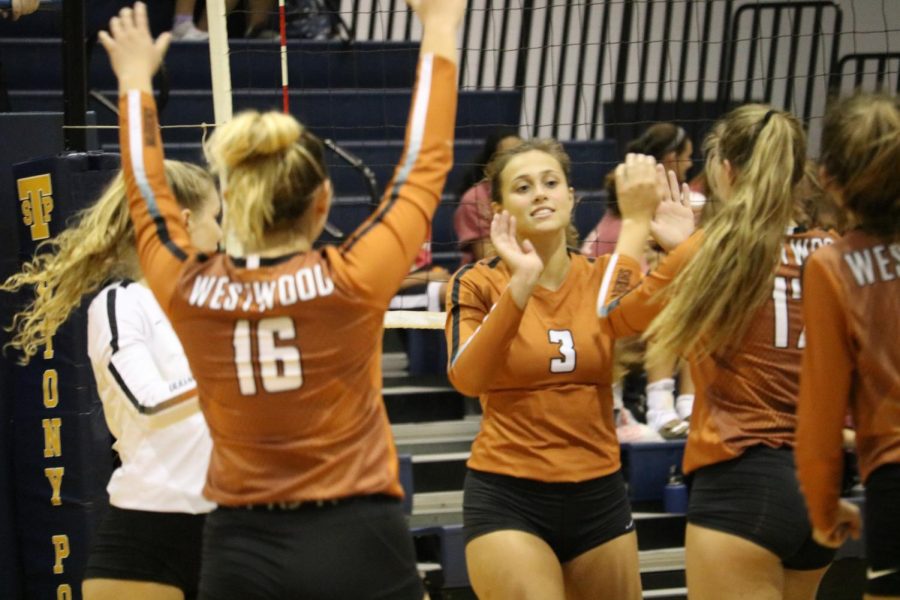 On Friday, Aug. 30, the varsity volleyball team played against the Stony Point Tigers and the Lady Warriors beat the Tigers 3-0.

“Our defense was scrappy and we could have done better,” Abi Rucker ‘20 said. “But we got the job done and won in all three sets.”

The Tigers started serving in the first set,but Erin Fagan ‘22 scored the first point of the game with a kill down the line. The Tigers bounced back at the Warriors and scored their first point with a hit, tying up the game. Zoey Menendez ‘20 made a kill off a block and a serve ace back-to-back, scoring two points for the Warriors 3-1. The Tigers fought back and tipped into the Lady Warriors’ defensive holes. The Warriors found a rhythm, scoring point after point with blocks from McKayla Ross ‘22 and serve aces from Kenzie Beckham ‘21. The Tigers took a time out to reset but the Warriors kept widening the point gap with serve aces and hits from Abby Gregorczyk ‘21. The Tigers stopped the Warriors’ rhythm with a deep line kill between the blockers.. The ladies finally hit game point when the Tigers hit the ball out of the court. Beckham scored the last point with a deep corner tip, and the Lady Warriors took the first set with the score of 25-12.

“The whole team was hitting really well,” Anna King ‘20 said. “It helped us stay ahead and take the win.”

Starting the second set, Maddie Gillispie ‘20 served first and Fagan gained the first point for the Warriors. The Tigers gained their first point with a serving error from Gillispie, making a tie. The Warriors gained points with kills from Fagan, Menendez, Ross, and Audrey Quesnel ‘20. The Tigers stopped the Warriors’ kill streak with a hit between the block. Beckham scored points with a dump and two serve aces. The Tigers stopped Beckham’s serves with two tips between the Warriors’ defense. Menendez and Gregorczyk stopped the Tigers with hits from the back row, and the Tigers took their first time out in the second set. Menendez hit both a roll shot and straight kill into the Tigers’ defense, widening the point gap. The Tigers gained a few points with blocking and hitting mistakes from the Warriors, and Gregorczyk made the Lady Warriors hit the twenty-point mark first with a kill from the outside. The Warriors hit game point when the Tigers passed too close to the net and Menendez slammed the ball down. The Lady Warriors won the second set when an opponent hit into the antenna, and the final score for the second set 25-13.

“Our serving was really good and aggressive,” Rucker said. “We kept them out of system a lot.”

The final set of the game began with Stony Point serving, but Menendez scored the first point for the Warriors with a kill down the line. During a long rally, Beckham and Gregorczyk made a collision, throwing the Warriors off and giving the Tigers their first point. Menendez racked up four points with serve aces.The Tigers changed up their playing style and gained points with tips. Quesnel used the same method as the Tigers and tipped into their defensive holes. Beckham threw the Tigers off when she slammed the ball into the ten-foot line and tipped into an unguarded area pushing their lead ahead. The Tigers took a timeout to stop the Lady Warriors, but Quesnel scored a point with a serve ace. Both teams continued to make mistakes and sub out players, but the Warriors managed to find momentum when Lola Fernandez ‘23 scored a service ace. The Warriors then hit twenty points when an opponent hit the ball out. The Tigers threw the Warriors off guard with a serve ace but King picked up the team with a kill. Stony Point tried to catch up with tips and deep corner kills, but Gregorczyk stopped the Tigers with a hit off of their blocks. Madeleine Shrull ‘21 made the Lady Warriors hit game point with a block, and line tip from Gregorczyk ended the final set. The game finished 25-17 with the Lady Warriors beating the Tigers in all three sets.

“The game went pretty well,” Ross said. “We got a little sloppy at the end but we managed to pull through and win.”

The varsity volleyball team will face the McNeil Mavericks on Tuesday, Sep. 3.